On April 28, 17 different relgious communities held a press conference in Austin, Texas to declare their support for their Muslim neighbors.  Each of these communities will be displaying one of our banners on their property.   The communities include University Methodist, University Baptist, Congregational Church of Austin, UCC, Trinity Church of Austin, Journey IFC, Faith Presbyterian, All Souls, St. Austin's Catholic Parish, St Andrews Presbyterian, Congregation Beth Israel, First Methodist, Prince of Peace Lutheran, First Unitarian Universalist Church of Austin, Church of the Savior, Live Oak Universalist Unitarian Church, University Christian, and the Texas Hillel Foundation. In this special newsletter, you will find a five minute video of the press conference.  In addition, you can read the op-ed of Rev John Elford that appeared in the Austin American-Statesman and the remarks of Rabbi Steven Folberg which were delivered at the press conference.  Finally, you can see some photos of the banners displayed in front of different churches.

Learning from our Muslim neighbors to build understanding

By John Elford - Special to the American-Statesman

Years ago when I served a different congregation in another city, I attended an Iftar banquet as a guest of the local Islamic Center. Iftars are the evening meals when Muslims break their Ramadan fast. We sat with the community in evening prayers and then feasted on incredible dishes and enjoyed conversation and laughter that showcased the grace and hospitality of our hosts.

The next day, I wrote a letter to the editor about the event, encouraging folks to get to know their Muslim neighbors and see beyond anti-Muslim rhetoric that seems to fill the air we breathe.

The morning the letter was published in the paper, I was at a breakfast meeting and I was taken to task by someone at the meeting for “cozying up to the enemy.” After the breakfast, someone complimented me on how poised I was under attack. Truth be told, I was so stunned, I didn’t know what to say.

During the last two decades, our perceptions of other faiths and of folks who are different from us have been shaped by hateful rhetoric, prejudice and misinformation. I wonder how different the world might be if our view of Islam was formed by genuine encounters with our Muslim neighbors. How might our world be transformed if our world-views were shaped by learning from other religions how to be better practitioners of our own faith?

In 1991, Siraj Wahaj, an imam from Brooklyn gave the first-ever invocation in the U.S. House of Representatives. In his prayer, he quoted a verse from the Quran: “Do you not know, O people, that I have made you into tribes and nations that you may know each other?” His prayer was a clarion call that our differences need not be ammunition for conflict, but are be a built-in diversity designed to move us toward our neighbors to enrich our lives.

In each community where I’ve pastored, I’ve taken time not only to befriend other pastors, but also to visit practitioners of other faiths. I remember one of my first visits to an Islamic center where I sat with a half dozen Muslim men in the imam’s office and we began to ask each other questions.

We laughed uproariously when they asked me why we don’t pray all that often — they were pleased to find that we do — and when I asked them how in the world they make it through Ramadan in the summer — they rely on the community and on shared meals in the evening.

Over time, I’ve learned that God is giving me Muslim friends so that I might rediscover the joy of hospitality, the grace of friendship and a deeper devotion to God. In other words, my Muslim friends are teaching me to be a better Christian.

Our doing good together in Austin, however, depends not simply on practicing our own faith well, but also appreciating and supporting people of all faiths. In times when anti-Muslim rhetoric raises its ugly head, its crucial for all of us to stand together with our Muslim friends.

One way several communities of faith are doing this is through “The Banner Project.” About 20 congregations around Austin will soon be displaying banners that say, “We Stand with Our Muslim Neighbors.” The project will kick off with a press conference on 2 p.m. Thursday at University United Methodist Church, 2409 Guadalupe St. You’re welcome to join us in this project as we rediscover the joy of working together for good in God’s holy name.

I know that for some of us, both here and in the larger community, having a Jewish rabbi (as if there’s any other kind) speaking on behalf of a program that opposes prejudice against Muslim Americans seems like an especially big deal. The fact is, it shouldn’t be a big deal at all, for Jews and Muslims have a great deal in common.

As faith traditions, Judaism and Islam share many things, including reverence for the stories of the Hebrew Bible, respect for religious law and scholarship, an identity that combines peoplehood and faith, and the worship of the same, singular God of all humanity, two of Whose names are derived from the same Semitic root: Allah for Muslims, Elohim for Jews. Muslims face Mecca when they pray; Jews face Jerusalem. And as if all of that were not enough, for the particularly observant in our respective communities, pepperoni pizza is, alas, off-limits.

For me, being here is also a recognition of those blessed times in Jewish history when Jews and Muslims routinely treated each other with admiration and respect. So I am here in honor of Muslims from Albania, Bosnia, Turkey and countries of the former Soviet Union, who risked their lives to save their Jewish neighbors during the Nazi reign of terror. And I am here as well to bear witness to those times in the Middle Ages when Jewish philosophers like Moses Maimonides and Hasdai ibn Shaprut served as court physicians to Muslim caliphs and learned Plato and Aristotle in Arabic translation at the hands of Muslim philosophers like Averroes.

Indeed, a Jew and a rabbi speaking out to protest bigotry aimed at our Muslim neighbors is only surprising if one insists upon burdening every interaction between our communities with the weight of all of the world’s geopolitical woes. But that is not what this moment is about.

For me, the best way to tell you what this moment is about is to think back to November 2007, when the annual Interfaith Thanksgiving Service sponsored by what was then called Austin Area Interreligious Ministries was to be held at a church not very far from here. Three days before the big service, when it became widely known that the Austin Muslim community was cosponsoring the service that year and that accommodations for Muslim afternoon prayers were going to be provided after the Thanksgiving service, the church hastily withdrew its offer of providing a venue for the service. Through a series of lucky coincidences, my synagogue, Congregation Beth Israel, ended up happily providing a venue for the service that year.

It was the largest ever turnout for the Interfaith Thanksgiving Service. People who would never have thought to give up a Sunday afternoon to attend that service came out just to protest the way the inhospitable congregation had behaved.

I will never, ever forget two impressions from that day.

Picture our small chapel, decorated with stained-glass windows with the six pointed Star of David and of course containing an Ark containing holy Torah scrolls. All the chairs had been removed, and prayer rugs had been arranged on the floor. And there, for the afternoon service, the Imam led his congregation in Muslim prayer in our synagogue. It was beyond perfect.

But, perhaps, more to the point, I will never forget when the service began, walking out onto the bema, the raised platform at the front of every synagogue. Not only was the sanctuary packed to the point of being a fire escape hazard, but we had cleared out the first 10 rows of chairs and there, sitting on the floor on prayer rugs, was a kind of United Nations mosh pit of religions and ethnicities, many in traditional dress.

And this is the thought that came into my mind: “I am so very proud to be an American at this moment. Nowhere else in the world could a service like this take place.”

It is in that spirit that I am with you today, standing up as a Jew for my Muslim American neighbors as my brothers and sisters. Especially during Passover, when Judaism demands that we Jews remember that we are descended from slaves and outsiders, I am proud to stand up for you against the haters and the bigots. Time and time again, my people have known what it is to be scapegoated, mistrusted and not allowed to feel at home. And so we will have your back. We will not let what too often has happened to us happen to you.

A couple of our other speakers referenced the biblical injunction to “Love your neighbor as yourself,” which in Hebrew is v’ahavta l’ray’akha kamokha. And a well known rabbinic interpretation of the verse teaches, this means, “Love your neighbor, for he is exactly as yourself.” Thank you. 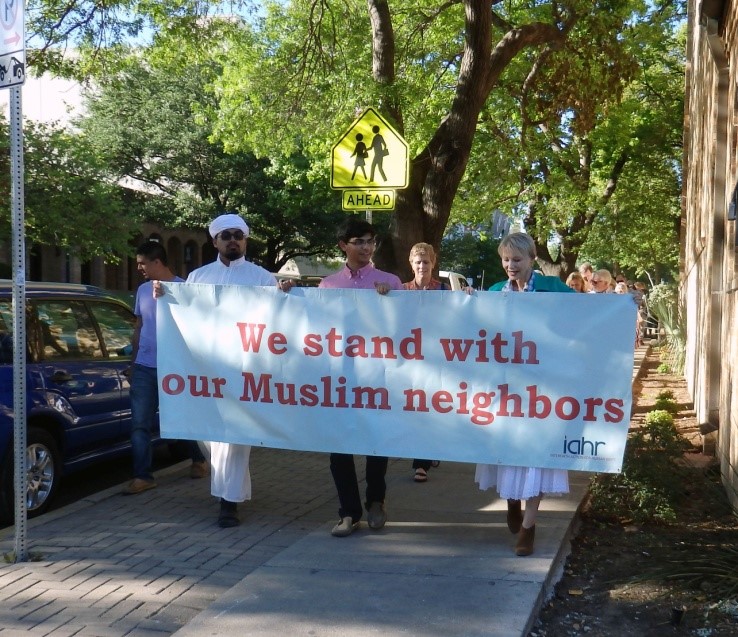 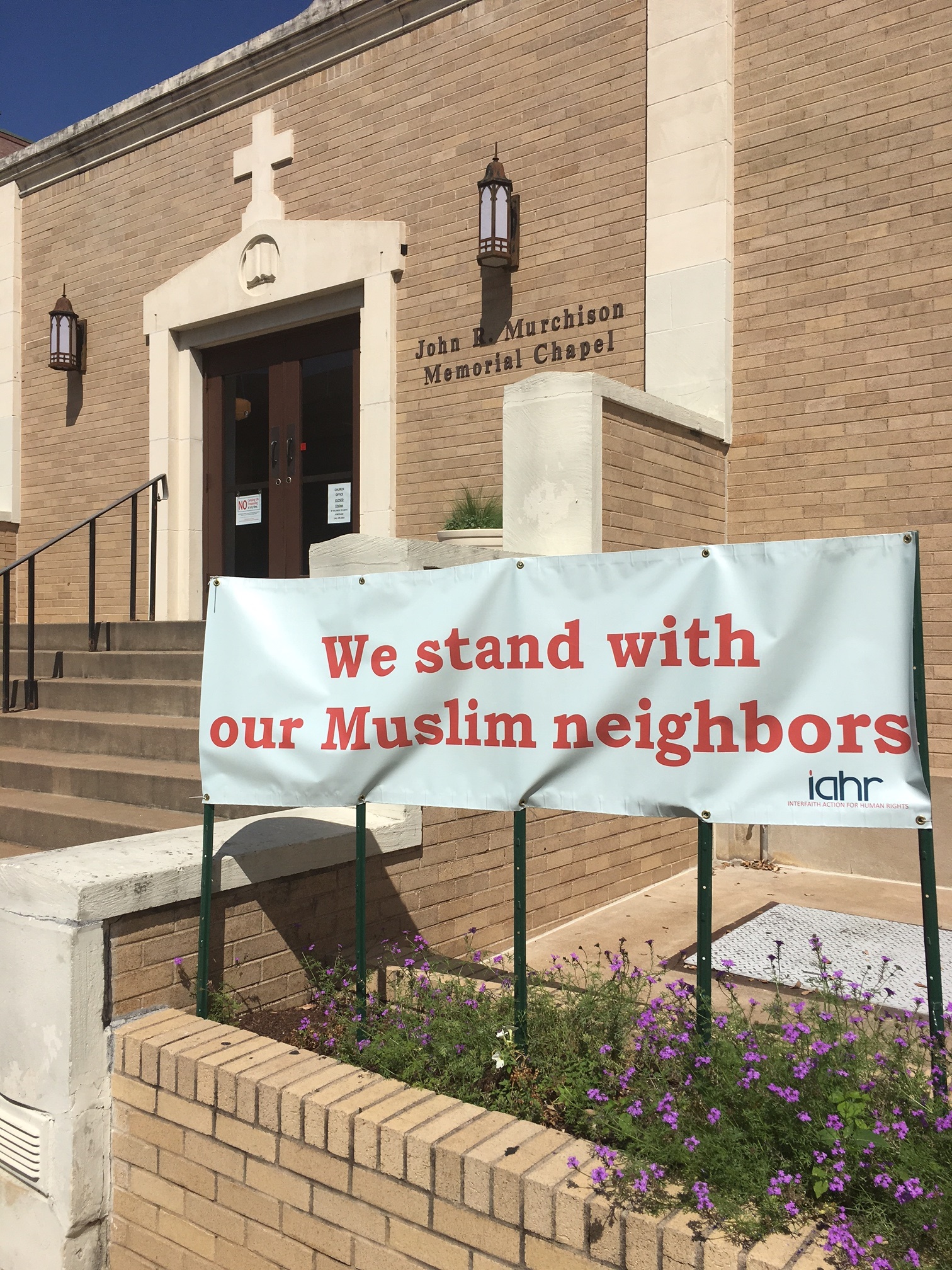 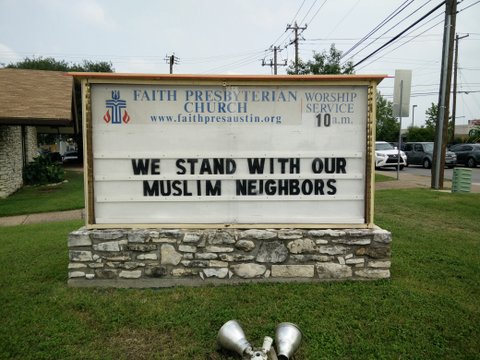 Please Remember to Donate to IAHR so we can continue this work!   Click here to make a donation.