The Virginia Coalition on Solitary Confinement 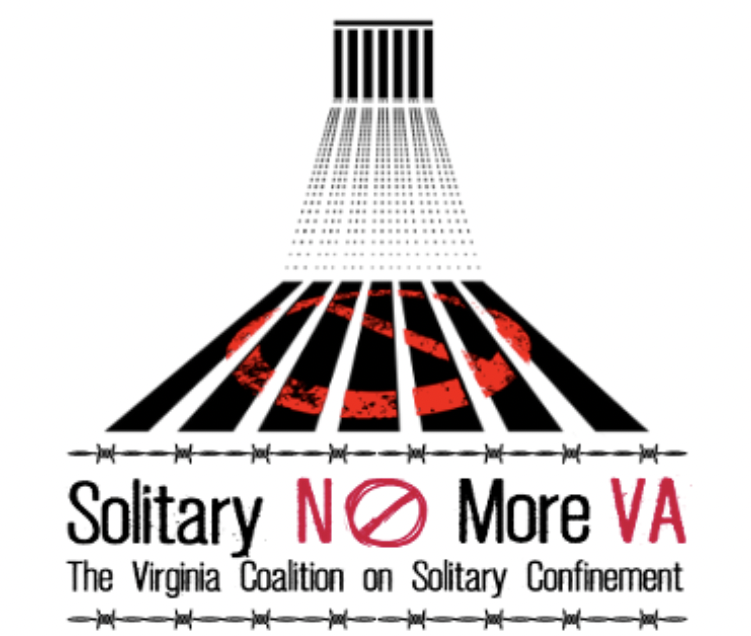 The Virginia Coalition on Solitary Confinement mission is to end the torturous practice of solitary confinement in Virginia’s prisons and jails.

For instance, two major court cases that VaDOC settled in January of 2021 highlight the extreme and inhumane treatment of incarcerated individuals who have suffered through solitary confinement. In one case, Nicolas Reyes spent nearly 13 years in solitary confinement at Wallens Ridge Prison in southwest Virginia due to his inability to read English. His only way of being released from the abuse of solitary confinement was by completing work in English. In another lawsuit, Tyquine Lee was trapped in solitary confinement for 600 days, which is the equivalent to 1 year and 130 days. This torture resulted in Tyquinne Lee being uable to speak nor take proper care of himself.

Through our direct advocacy over the past two years, we have been able to successfully reduce the number of people in solitary confinement by 31%. However, we still have a long way to go in order to ensure that there are no more cases like Nicolas Reyes and Tyquine Lee. We want the community to join our efforts in preventing long-term solitary confinement, a practice that should not be normalized. To find out more stories about the reality of solitary confinement, watch our youtube channel in which we invite formerly incarcerated individuals or their loved ones to come forth in sharing the sad truth that is happening behind those confined walls. We hope to improve our criminal justice system towards a more humane and productive future for our society as a whole. 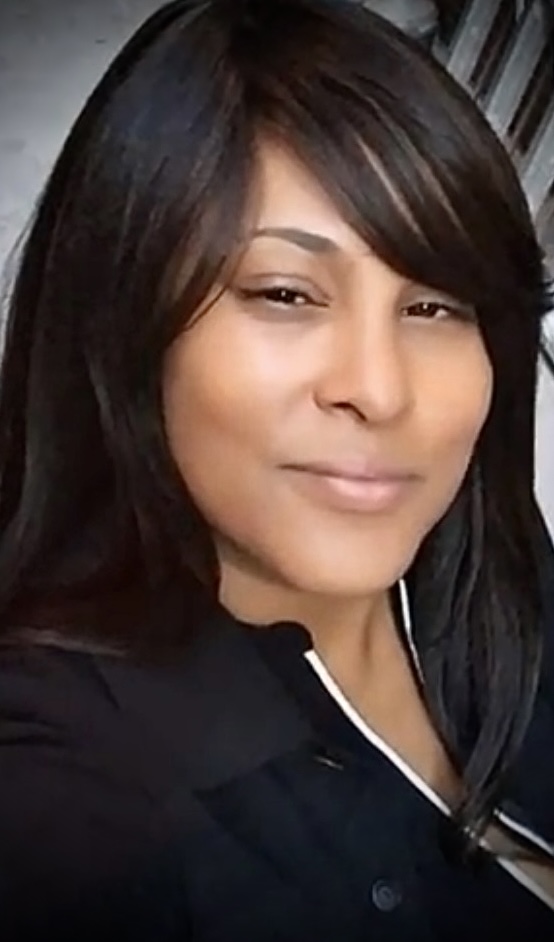 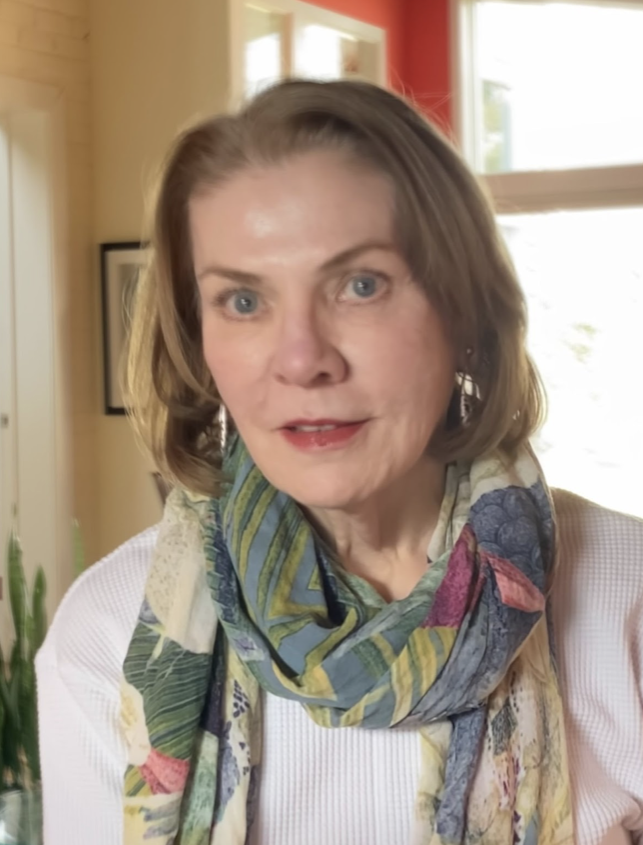 "Humans Out of Solitary"

Natasha White is IAHR's Director of Community Engagement in VA, who describes the need for us to support our local and federal legislative efforts to end solitary confinement behind the wall. Subscribe here to stay updated on the efforts of the Virginia Coalition for Solitary Confinement.

For those who were not aware of IAHR’s efforts in support of SB108/HB1291, Click here to be updated by the Virginia Coalition on Solitary Confinement and subscribe to the IAHR YouTube channel to stay updated.

Our organization continues to host “Students Against Solitary” seminars inviting students to learn about our mission in person or over Zoom.

One of the presentations was hosted at Old Dominion University with graduate students and Ph.D. students who are studying Social Services and Criminal Justice. 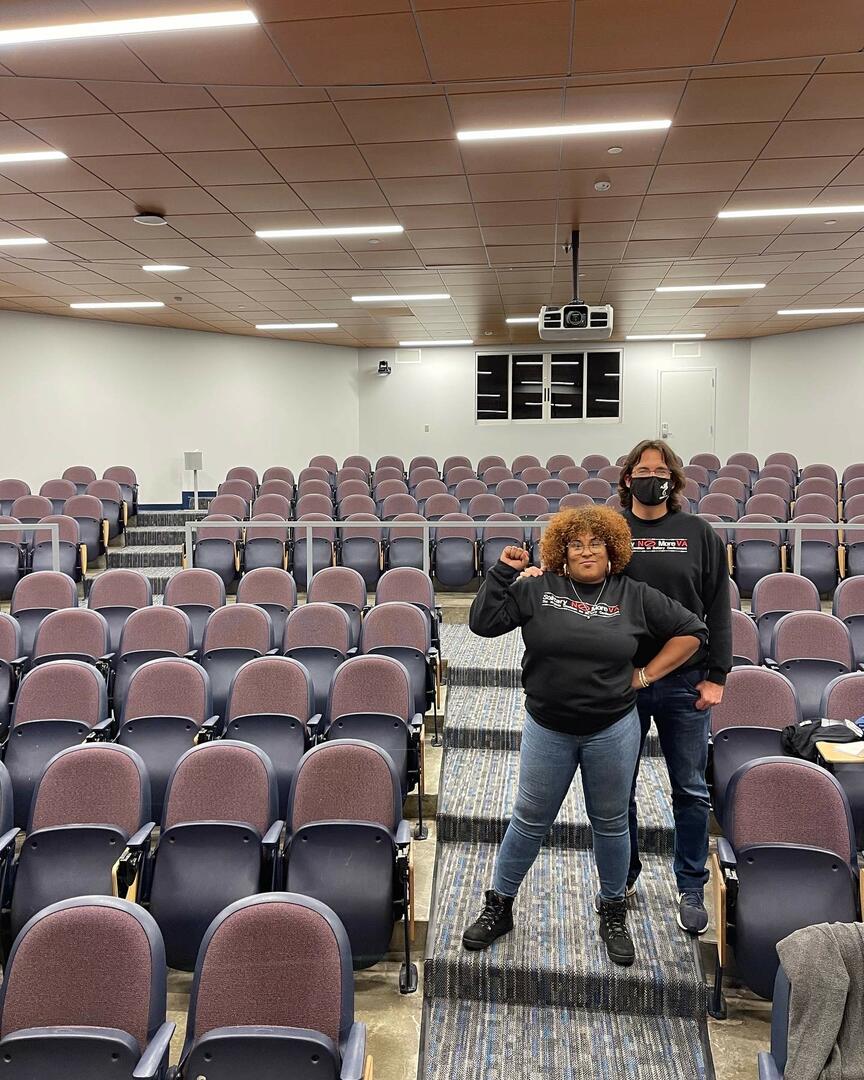 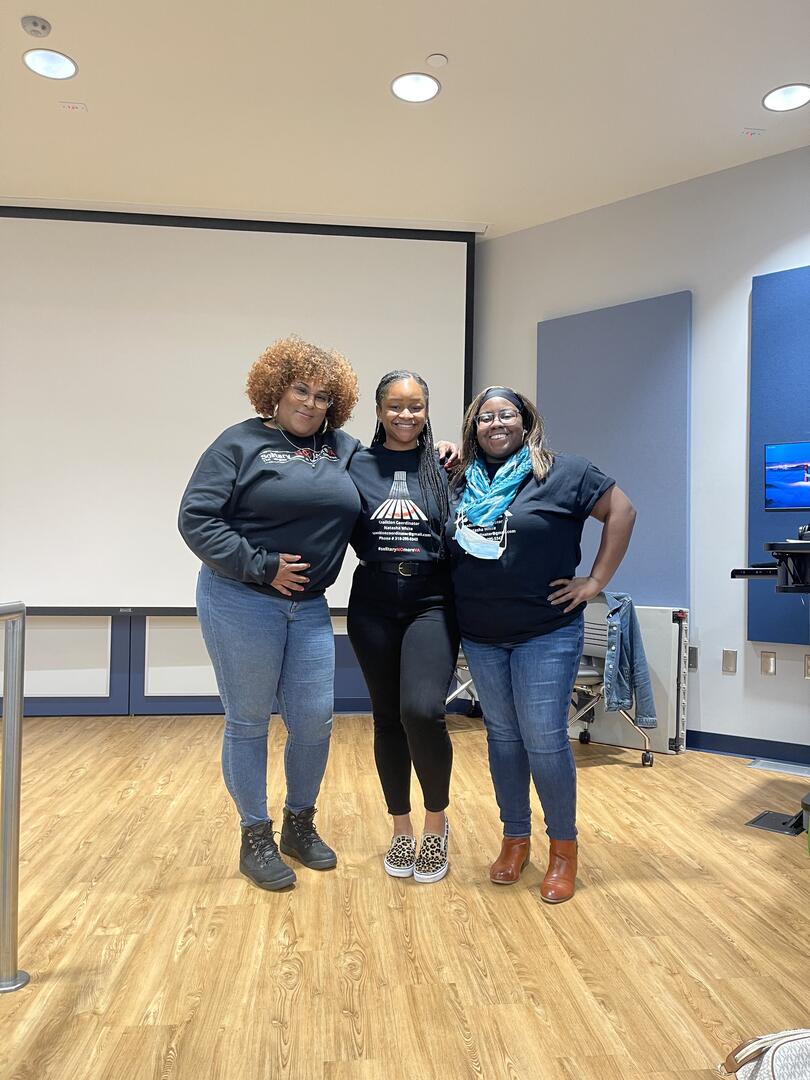 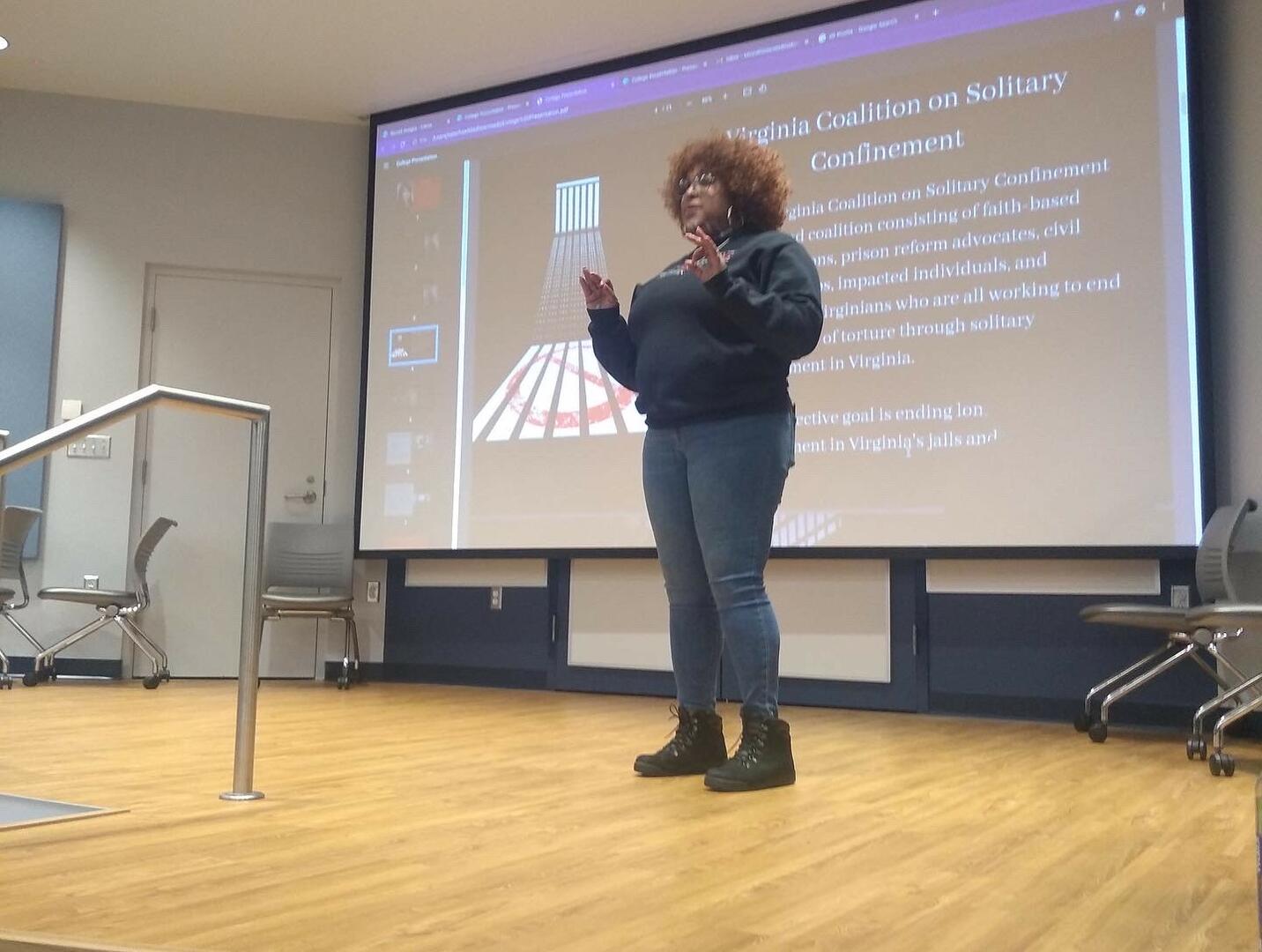 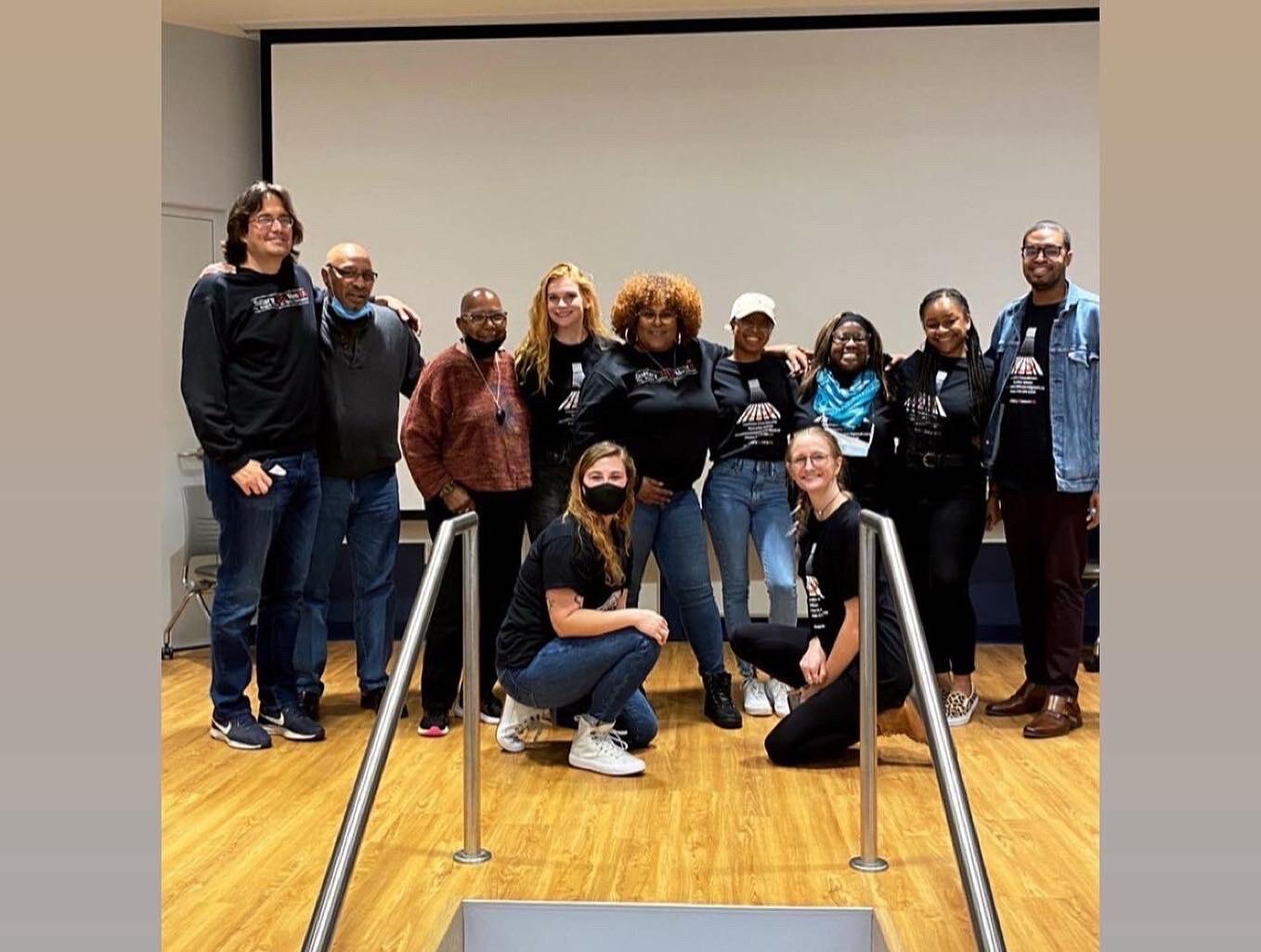 The Virginia Coalition on Solitary Confinement was on tour this past Fall 2021 to increase awareness in Virginia about the conditions and treatment of individuals placed in solitary confinement.

The organization has been touring around Virginia to speak with Delegates, probation offices, and community members about solitary confinement, a form of torture in Virginia’s prisons. On tour are the Coalition’s Coordinator, Natasha White, and former Coalition Chair, David Smith, who have coordinated numerous meetings at various locations such as Southside, Shenandoah Valley, Roanoke, and Charlottesville.

Natasha and David have discussed the horrendous practice of long-term solitary confinement and the urgency of reducing it with a number of Delegates during their scheduled, individual meetings. For instance, they met with Delegates Tony Wilt and Todd Gilbert of Shenandoah Valley, VA. In Southside, they have met with Delegate Danielle Marshall in order to discuss the same pressing issue. Furthermore, they attended meetings with Delegate Robert Bell of Southwest, VA and Delegate Marie March of Roanoke. They are currently coordinating meetings with Delegate Terry Kilgore of Southwest, VA, and Delegate Wren Williams of Southside, VA.

While on tour, Natasha and David traveled to probation offices located in Southside, Shenandoah Valley, and Charlottesville. They placed the Virginia Coalition on Solitary Confinement’s door knockers in order to disseminate information about the organization’s mission of preventing long-term solitary confinement. The door knockers are dispersed at housing complexes of those who have been directly impacted. In an effort to raise awareness,  Angela Miles, a reporter for the VPM news magazine shadowed Natasha and David on tour to document their milestones. Stay tuned for the interviews that Angela Miles documented that will premiere in early 2022!

Natasha White has also planned a virtual webinar series via Zoom that is titled “Students Against Solitary Confinement”. The Coordinator intends to bring students across various universities in Virginia to attend the virtual meetings as a way of learning about the organization’s goals, the negative consequences of solitary confinement, and ways to become involved in our advocacy efforts.

Natasha has been invited to be a panelist on numerous occasions. For example, she has spoken at a virtual “Coffee Talk” meeting with students attending George Washington University. Similarly, on December 10th, she has scheduled a meeting to share her story once more with Old Dominion University in Virginia. She has been a panelist for American Civil Liberties Union of Virginia (ACLU-VA) to discuss organizing advocacy after Virginia’s election. She has also spoked on a segment titled “Solitary Confinement”. The Coalition former Chair, David, has attended a virtual event at Pace Center in Virginia Commonwealth University in collaboration with Virginia Interfaith Center for Public Policy. 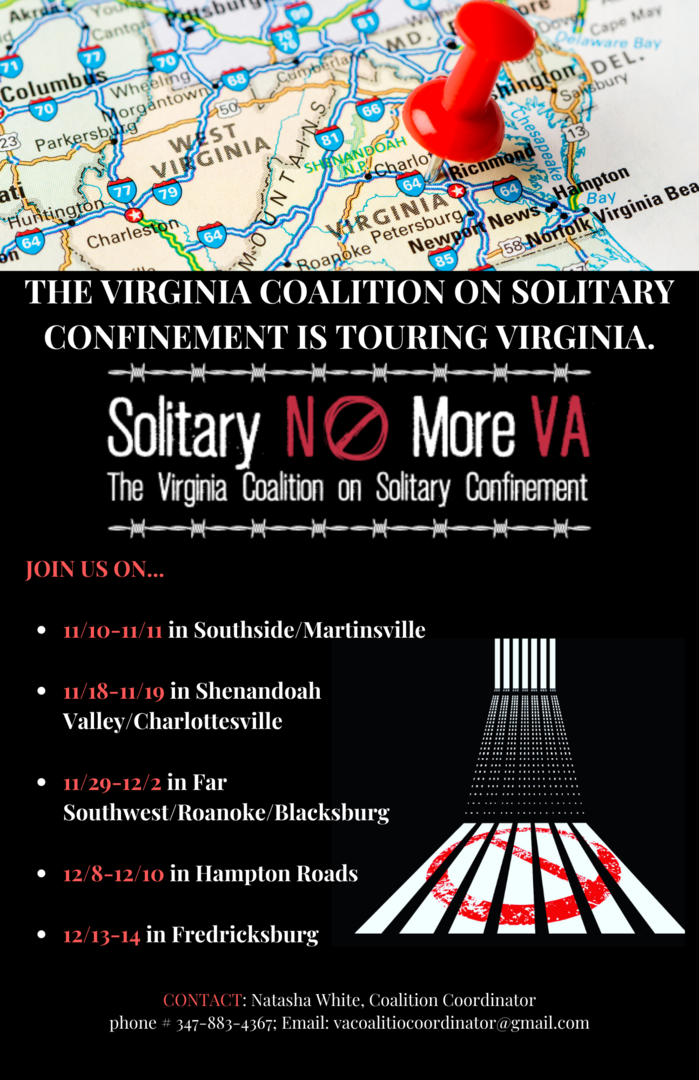 A Story From Inside:

“Virginia recently changed its name on their segregation units from restrictive housing to restorative housing which is governed by Operating Procedure 841.4. When you read the new Operating Procedure 841.4 it’s clear Virginia is not serious about getting rid of [solitary confinement]. The new policy only changes the word restrictive to restorative. All restrictions are still in place and the same. The policy does say a 4 hour minimum out of cell daily, here’s the catch. I’m in a 22 man unit, with only 5 outside recreation cages so if you don’t make the officers’ top 5 list you don’t get recreation. I have been offered to be strapped to a table in the pod which allows no movement while strapped to it.”

*Names have been omitted for confidentiality purposes*

We need your support! Contact your legislative representatives via email or phone asking for their vote on SB108. You can use the email template below to send to your representative. Specifically, please contact…

I am asking you to please support bill SB108 that will end long-term solitary confinement in Virginia’s prisons. Solitary confinement (also known as Restorative Housing) is a form of torture as this practice entails caging an individual into a miniscule space while depriving them of basic human needs for 20+ hours a day. Studies have shown that isolation could be both mentally and physically taxing because people are restricted from meaningful interactions and mental stimuli. In 2001-2019, there were 11 suicides per 100,000 incarcerated individuals in Virginia’s federal and state prisons. Furthermore, the Virginia Department of Corrections (VADOC) settled two lawsuits in 2021 due to the negative repercussions a person suffers while in long-term isolation.

Not only is solitary confinement inhumane, but this overly-punitive practice is putting a dent in Virginia’s budget. This is because research shows that solitary confinement has increased states’ budgets. Alternatively, those who have limited this practice have tremendously saved money. For example, as reported by ACLU in “Paying the Price for Solitary Confinement”, Mississippi saved $8 million each year after 2010 and Illinois saved $26 million after 2013 . Similarly, the California Department of Corrections and Rehabilitation budget in 2016-2017 was significantly reduced by $28 million. This research indicates that Virginia is likely to mirror these states in saving money long-term once the use of solitary confinement is limited.

SB108 will come before you and your committee this session. This legislation ends the unsafe practice of long-term solitary confinement by limiting the amount of days a person can be isolated to a maximum of 15 days. According to the United Nations and numerous other studies, confinement after 15 days is considered torture because that is when people feel negative mental and physical affects. As your constituent, I ask that you support SB108 that will change the incarceral experience from torturous to teachable. The bill requires more transparency in the use of solitary confinement in Virginia along with implementing prosocial programming. This will change the current practice that has no beneficial programming in place, which poses a threat to public safety by undermining the chances of incarcerated people successfully reentering our communities.


Please support SB108 when it comes before you.

Unfortunately, bill SB108 that would have ended long-term solitary confinement in Virginia by limiting the days of isolation to a maximum of 15 days did not pass. The bill initially showed promise as it successfully made its way through the Senate, but it was voted against in the Public Safety Subcommittee #2.

The bill has turned into a research study, which means that rather than ending long-term confinement, the new proposal will make Virginia officially document the use of restorative housing units. We are still waiting to see whether or not the study bill will pass in the coming weeks. To stay up to date click here. Although SB108 did not pass, this is only a setback that will fuel the Coalition’s efforts for continuing to end long-term solitary confinement. We need as many people as possible to join us in this ongoing battle

Death is preventable inside correctional facilities but we are learning no prevention is happening inside. Watch the Public Service Announcement "Preventable Deaths" with Natasha White, IAHR's Director of Community Engagement in VA, who describes the need for us to support our local and federal legislative efforts to stop the death of loved ones behind the wall.Subscribe here to stay updated on the efforts of the Virginia Coalition for Solitary Confinement.

For those who were not aware of IAHR’s efforts in support of SB108/HB1291,Click here to be updated by the Virginia Coalition on Solitary Confinement and subscribe to the IAHR YouTube channel to stay updated.

Follow TVCSC on social media to find out more about upcoming events!

Do you want to join our fight to end torture that is long-term solitary confinement in Virginia’s prisons?

Anyone who is interested can join us on our virtual community members meeting that are hosted on the last Thursday of every month.