A lot is happening at IAHR! Our annual event, "Human Rights at the Prison Door will take place at Adas Israel Congregation on October 27. Please remember to RSVP!

You will find a report from Rabbi Feinberg IAHR's legislative plans for the fall and winter as well as a letter from an incarcerated man at North Branch Correctional Institution.

The September Newsletter concludes with two reports. One is from our friends from the Prison Policy Initiative reporting how many people are released from state prisons annually. The other is an inspiring video called "Rehab City" from Stanley Hallet, dean emeritus of the School of Architecture at Catholic University. Mr. Hallet has a vision of correctional institutions whose mission would be rehabilitation. I found it inspiring. 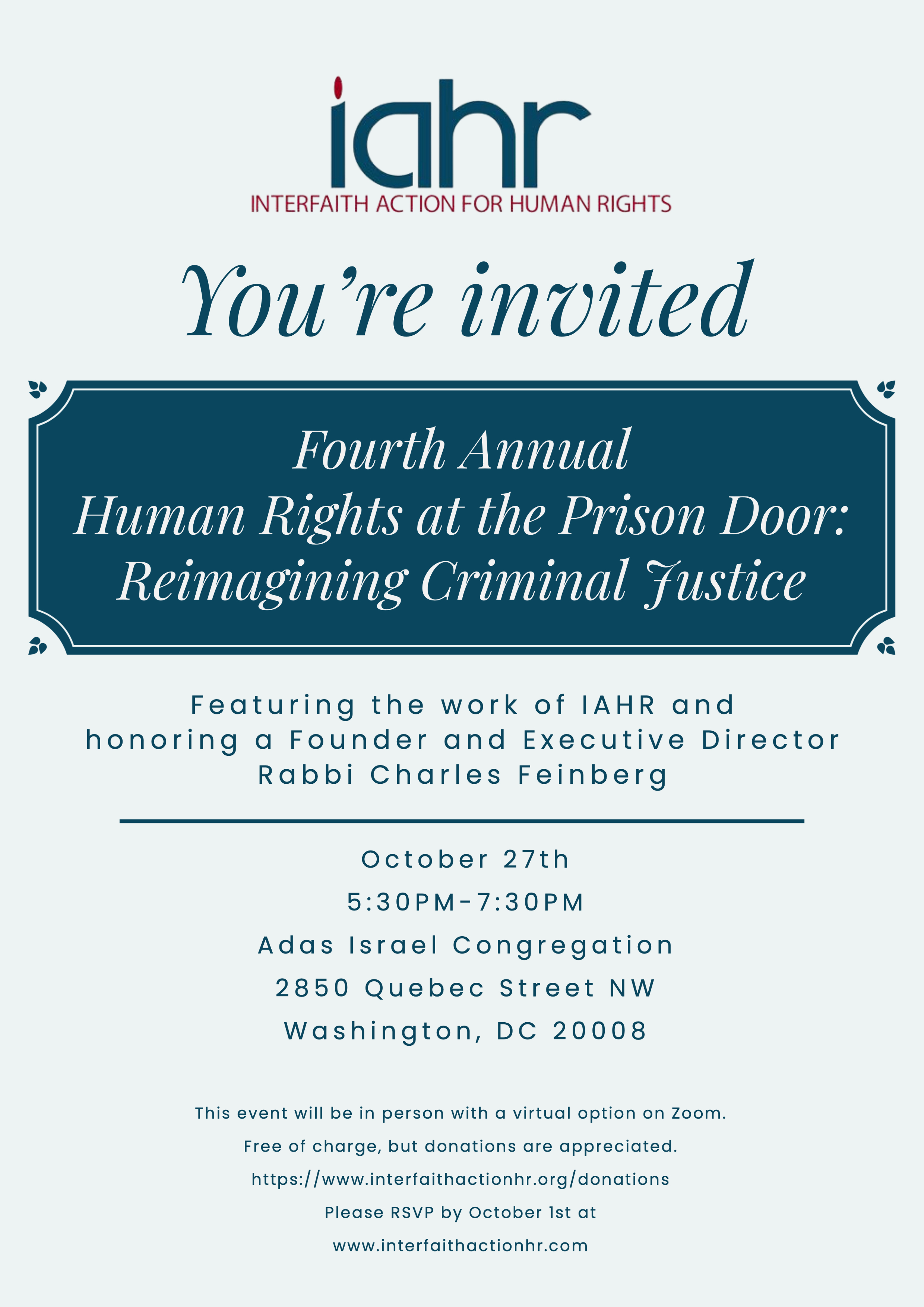 Much has been happening this summer. Here is a brief report on our efforts to end prolonged isolation in Maryland, DC, and Virginia. 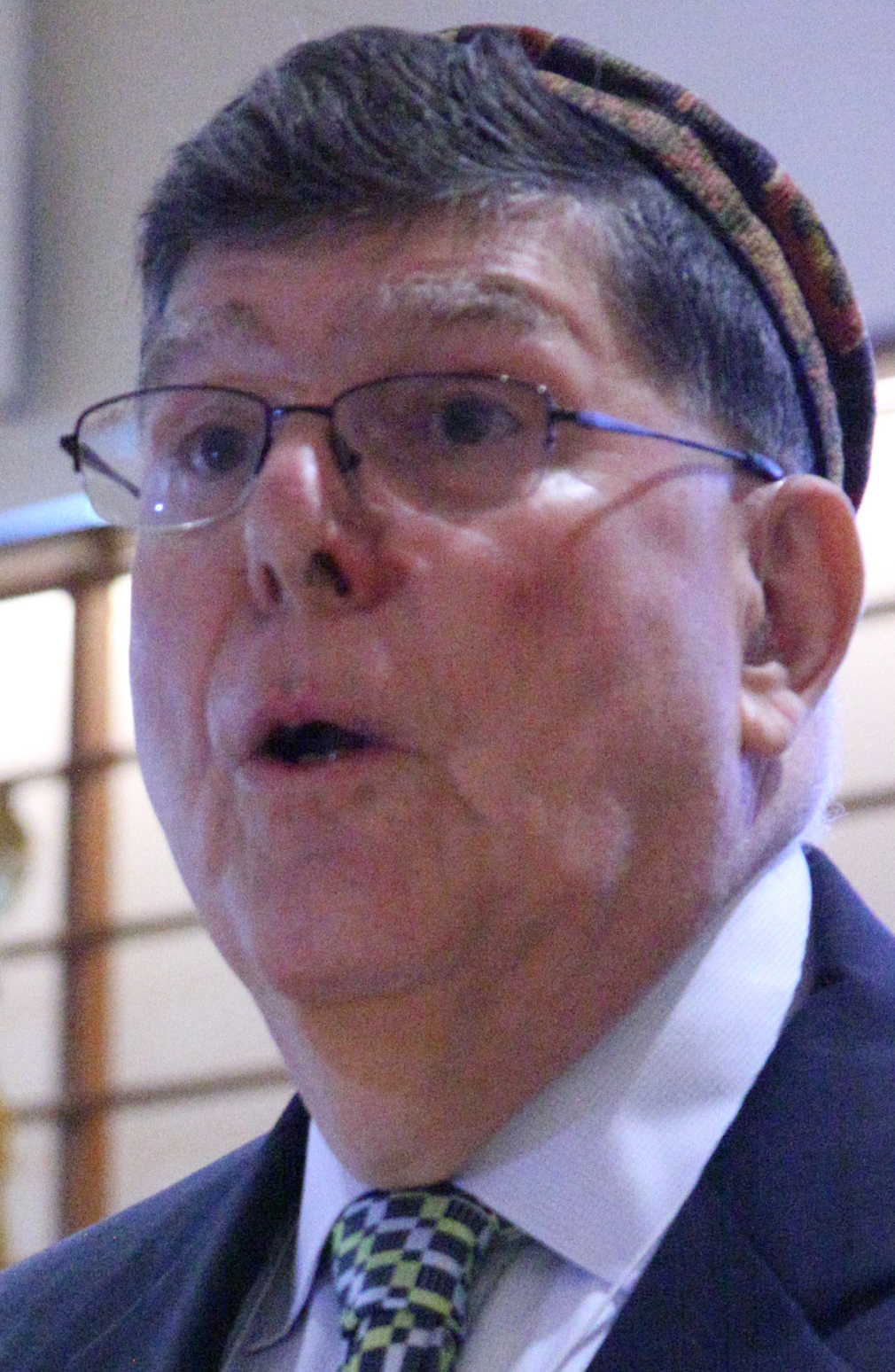 IAHR was one of many sponsors of the End of Isolation Tour: "The Box." The Tour presented "The Box", a play about the brutality of solitary confinement in 10 different cities. We promoted the play in Baltimore and the District of Columbia. Attendance of the play was very good in both venues. We are grateful to the leadership and assistance that Natasha White (IAHR director of community engagement in Virginia), Kimberly Haven (IAHR legislative liaison), and Brittney Floyd (IAHR Data Entry Specialist) provided. If you missed seeing "The Box", you can read about it at the End of Isolation Tour website.

During the last session, the Virginia Legislature passed legislation directing the Virginia Department of Corrections to conduct a study of prolonged isolation (solitary confinement) in its prisons. The legislation also directed the Department to include representation from the Coalition. Since July, five members of the Coalition have been meeting with representatives of the Department to hammer out how the study should be conducted. There was agreement that incarcerated people who have been in solitary should be interviewed. But there has been much disagreement on the details such as the questions that should be asked, the number of questions, and under what conditions the incarcerated people should be questioned. We will much more to report in the October newsletter.

The Maryland Coalition on Solitary includes representatives from the Maryland Alliance for Justice Reform (MAJR), Jews United for Justice (JUFJ), Disability Rights-Maryland, the National Alliance for the Mentally Ill (NAMI), and a number of IAHR supporters and pen pals. Several members of the group met with an advisor to the Wes Moore campaign. The campaign seemed very interested and supportive of our legislation. This month the Maryland Coalition will be reviewing a draft of the legislation.

The legislation which will be sponsored by Delegate David Moon and Senator Susan Lee proposes to limit solitary confinement to 15 consecutive days within a 90 day period. Other details about the bill will be forthcoming later this fall. The next meeting of the Coalition will be via zoom on Thursday, September 15 at 1 p.m. If you would like to attend the meeting please contact Brittney Floyd for the zoom link.

Unlock the Box Coalition in the District of Columbia

Unlock the Box which is a national organization funding different state initiatives to end solitary confinement has funded an effort to end solitary at the DC Jail. The DC Justice Lab is heading this initiative. They have organized a large coalition of non-profits and individuals including returning citizens. They have written a solitary bill and there will be a hearing on the bill before the DC Council during the last half of October. More details about the October hearing in the October newsletter 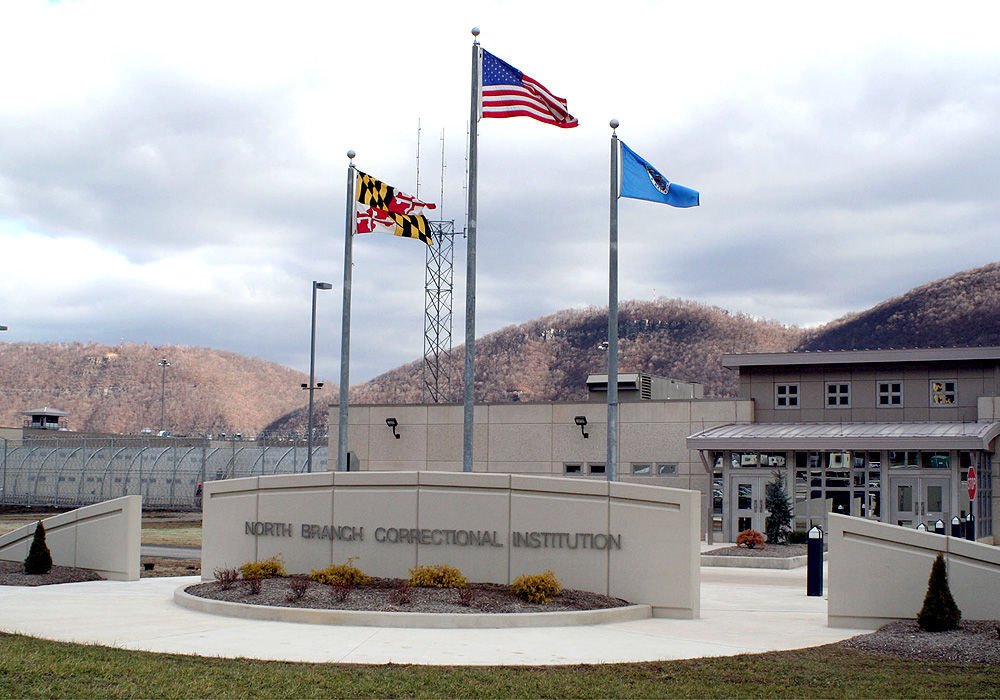 I am writing this letter in reference to the conditions and psychological tool Administration Segregation has taken on my life and family.

In brief, I have been incarcerated for 12 years, serving an 80-year sentence.  My mental state over the last few years has become increasingly agitated. I would say depressing, but I don’t know what that feels like, I only know good thoughts and bad, good days and bad days.

The Officers at North Branch Correctional Institution (NBCI) create the problems that plague the institution. I have been on Admin for 5 years, for altercations with other inmates. Every month I go for Admin. Seg.(administrative segregation) Review in which my Case Manager, Ms. Johnson, tells me my status ain’t change, (it) remains Admin Seg. Due to enemies. 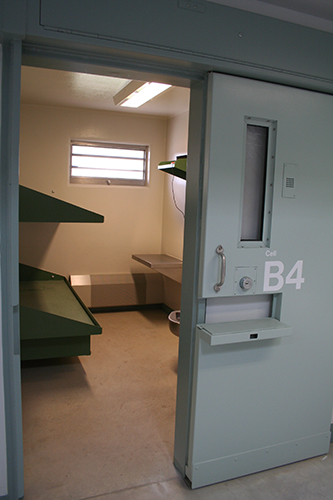 I’ve asked what is the plan for me and basically, up to this point, there is no plan.  I’m told I have to wait until my enemies get in trouble in order for me to go on the compound, then they will place my enemies on (in) Ad. Seg. The problem is I have more than one enemy, NBCI says, which makes it nearly impossible for my enemies to get in trouble at the same time.  So basically I’m just stuck on (in) Admin (segregation) in limbo. ¶

I am not familiar with writing ARPs. I did write IGO (inmate grievance office) about being classified as Max II. Basically, they say NBCI is the only prison in Maryland that can house Max II inmates.  For the last few years, I’ve been asking to be transferred or sent out of state to no avail.  Admin is taking its toll on my mind, body, and family.  I’m caged 23/1 a day, but I rarely come out of my cell.  The last five years have been increasingly difficult.  I feel trapped and targeted by the Administration, have no access to a full phone call and rec privileges, legal library, and family visits which I am becoming further behind, isolated, and feel like I don’t want to be around anyone or sometimes Hopeless.  I want the same as any inmate, to be on the compound.  I’ve been fighting this fight since day one and (I am) a firm believer in human and civil rights.  NBCI has immunity to do and violates human and civil rights (.

In closing my only wish is to improve my living conditions and stop unjust punishment in hopes, that NBCI will stop using the Administrative process and Max II criteria as a form of Alternate punishment.

Prison Policy Initiative: Since you asked: How many people are released from each state’s prisons and jails every year?

The number of people going through reentry each year vastly exceeds the resources available to them in most communities.

The key role of reentry programs and services in the success of people released from prisons and jails cannot be overstated. People returning to their communities from even relatively short periods of incarceration often have acute needs related to health, employment, housing, education, family reunification, and social supports – not to mention challenges obtaining essential documents like birth certificates, Social Security cards, and driver’s licenses or other identification. The service gaps between these predictable needs and the resources available to people in the critical time period following release contributes directly to both early deaths and the cycle of re-incarceration (“recidivism”) for far too many people.

In 2019, we wrote about the extreme gap between needed and available reentry services for women, who report a higher need for services than men, but who are frequently overlooked in reentry programs targeted at the much larger population of incarcerated men.

Since that publication, journalists, advocates, and service providers have reached out asking about the total number of people released from prisons and jails in their state each year. While these are numbers you might expect would be easy to find, they aren’t published regularly in annual reports on prison and jail populations by the Bureau of Justice Statistics. In fact, the annual data collected by the federal government about local jails (the Annual Survey of Jails) cannot generally be broken down by state; only the more infrequently-collected Census of Jails data can be used to make state-level findings. 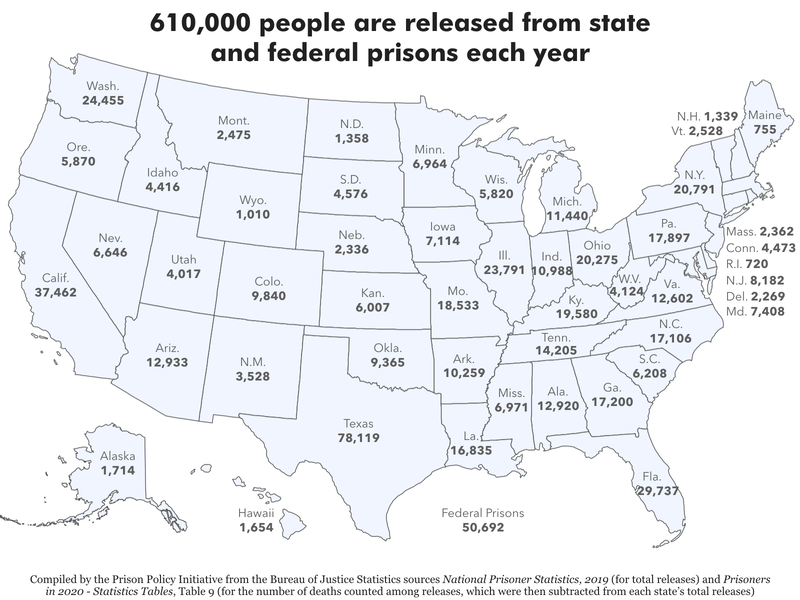 Stanley Hallet is dean emeritus of the School of Architecture at Catholic University. He has thought long and hard about how to turn correctional institutions into places that rehabilitate instead of just punishing people. He believes that the design and structure of a prison is essential to making it a healing place that can help incarcerated people make different decisions for themselves. I urge to view this 22 minute video that Mr. Hallet produced. The video is truly inspiring and gives us a way to dream and hope.  Here is the link to the video.