IAHR needs your help in demanding justice from the Virginia Department of Corrections for multiple prisoners within their system. 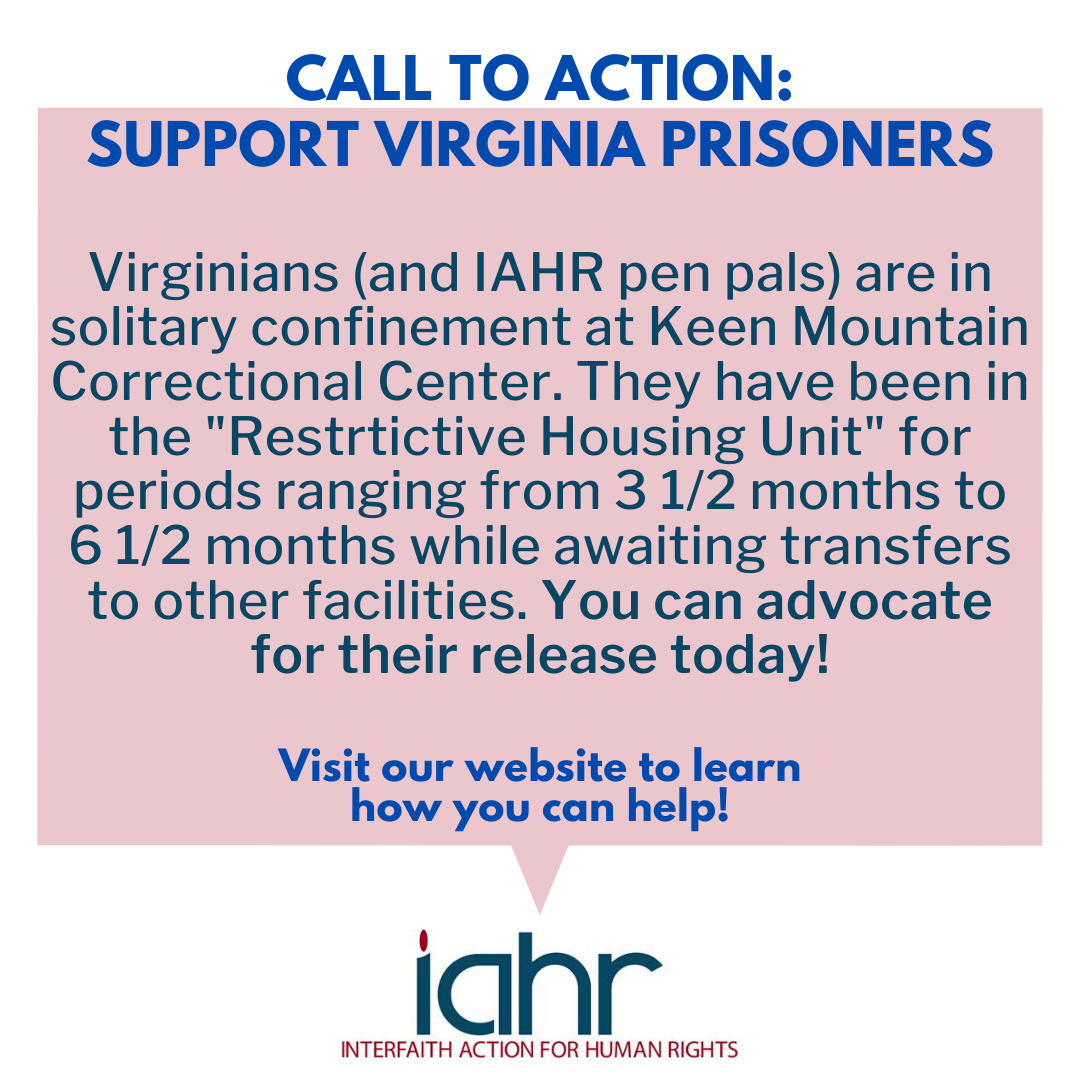 Virginians are in the Restrictive Housing Unit/RHU (solitary confinement) at Keen Mountain Correctional Center. They have been in the RHU for periods ranging from 3 1/2 months to 6 1/2 months while awaiting transfers to other facilities. They have been told that they will remain in the RHU until the COVID-19 pandemic has ended, because transfers have been suspended during the pandemic. However, the Department of Corrections (VADOC) has said that "exceptions can be made to the suspension of transfers," and numerous other transfers have taken place recently. This includes a group of approximately 15 men who were transferred very recently from the Nottoway Correctional Center to Keen Mountain. In fact, one of the men who had been told he could not leave the Keen Mountain RHU was transferred to Sussex I State Prison just in the last few days.

Matthew Ratcliffe has told Interfaith Action for Human Rights (IAHR) that he has been threatened, attacked by gang members, and seriously injured at multiple prisons. He believes he will be safe only if he can be transferred out of the western region.

Joshua Phelps is a former member of the Aryan Brotherhood. After deciding to leave the Brotherhood, he became the subject of a "kill order" by the Brotherhood. He feels extremely unsafe and reports being harassed not only by other prisoners, but by officers at Keen Mountain, who have allegedly identified him as a "snitch" to other prisoners, told him he deserves whatever he gets for "snitching" on the Aryan Brotherhood, ransacked his cell as retaliation for filing complaints and grievances, and threatened to plant knives in his cell. He wants to be transferred to another state.

The VADOC's own operating procedures recognize that protective custody is a housing arrangement that is different from "restrictive housing" (formerly known as segregation or solitary confinement). While in the RHU, Mr. Phelps and Mr. Ratcliffe have been subjected to restrictions that are punitive as well as unnecessary and inappropriate to their asserted need for protection. These restrictions include no access to television or newspapers; very limited access to recreation, email, and phone calls; and very limited time outside their cells. In particular, Mr. Ratcliffe's attempts to communicate with advocates outside the prison have been obstructed by staff at the prison. All of the prisoners named in this email have reported being pressured by staff not to file complaints and grievances about their treatment.

Arthur Marrone #1209916 was placed in the RHU at the beginning of April following a disciplinary charge that he says was false. He requested several pieces of evidence, including video footage, and witness testimony to be produced at his disciplinary hearing, all of which he was denied "due to being from an outside source, restricted for security reasons, information is not written documentation [sic], or is otherwise restricted to the offender." Mr. Marrone states that he has completed the "step-down program" for offenders in "restrictive housing" and should be released to general population. Mr. Marrone has a medical condition that makes him especially vulnerable to COVID-19, but that is not a reason for keeping him indefinitely in "restrictive housing."

Henry Herrera #1430627, Alvaro Saenz Castro #1796291, and Reinaldo Portillo #1827689 are also stuck in the RHU. They have been told not to even attempt to complete the "step-down" program because they won't be released from the RHU. They are complaining of discrimination against them based on their ethnicity. Only Mr. Herrera speaks English. They say that officers mock them and call them names like "taco," "chimichanga," and "burrito," in addition to other forms of harassment and threats, as reported by Marrone, Phelps, and R

Michael Ford #1471470 is currently incarcerated at Greensville Correctional Center. As of April, he had had no disciplinary issues in the last 4 years and qualifies for transfer to a lower-level facility, but he was told he could not be transferred until the COVID-19 pandemic was over, which is clearly not consistent with the fact that other transfers are occurring.

Mr. Ford was placed in the RHU at Greensville on April 14, 2020, and is still there. This happened apparently because he was given a disciplinary charge for allegedly threatening an officer, which he denies. In fact, the charge was subsequently dismissed. No reason has been given to Mr. Ford as to why he is considered to pose a security threat that cannot be managed without keeping him indefinitely in "restrictive housing."

How can you help?

We encourage you to contact officials at the Department of Corrections! You can copy and paste the e-mail below and forward it to the following people, or you can write your own e-mail addressing similar points. Please share this initiative far and wide!

Dear Officials at the Virginia Department of Corrections,

My name is [YOUR NAME]. I am a volunteer for the Interfaith Action for Human Rights (IAHR), a non-profit dedicated to ending policies and practices that promote torture in our society and countering bigotry directed against vulnerable populations.

We urge corrections officials at the Virginia Department of Corrections to ensure the safety of Matthew Ratcliffe and Joshua Phelps by either placing them in housing that constitutes authentic protective custody, without punitive restrictions that are unnecessary for their safety, or transfer them to a facility—either in another region of Virginia or another state—that will be safer for them.

We also urge you to either release Arthur Marrone, Henry Herrera, Alvaro Saenz Castor, Michael Ford, and Reinaldo Portillo to general population in their respective institutions or transfer them, with proper precautions to avoid exposing them to COVID-19. Although the VADOC's policy has been to suspend transfers during the COVID pandemic, clearly transfers have been made recently and can be made, with proper precautions to avoid exposing prisoners to COVID-19. Keeping people in conditions that amount to solitary confinement for months on end, with no clear end in sight is inhumane and inconsistent with the United Nations Standard Minimum Rules for the Treatment of Prisoners. The body of relevant scientific evidence and the opinion of most mental health experts indicate that prolonged isolated confinement results in significant and lasting harm to human health.

Additionally, an independent and impartial investigation should be conducted into the conduct of officers working in the RHU at Keen Mountain, and VADOC officials should ensure that officers are held accountable for any allegations brought by these prisoners that are found to be accurate. Mr. Ratcliffe's communications with IAHR have been blocked at times, without providing him with a reason for this. This action is in clear violation of VADOC policy (Operating Procedure 803.1), which states that "when offender correspondence is censored or rejected, the offender or sender should be notified of the reasons for the action and have an opportunity to appeal that decision in accordance with the operating procedure." This is not acceptable, and Mr. Ratcliffe and IAHR are entitled to an explanation and an assurance that this will not happen again.

We are the midst of a major social change for the better. Please do your part and ensure that the prisoners under your watchful eye are protected, and allowed to serve their time in a humane manner.