In the January 2020 of the IAHR newsletter, you can find the following articles:

Sign Up for Advocacy Day in Annapolis, MD on February 19

Refreshments will be served

Tyrone Walker was a juvenile lifer who was released in December 2018, after serving nearly 25 years of imprisonment. Tyrone works at the Justice Policy Institute as an Associate (JPI) where they work on prison reform through groundbreaking research, communication strategies, and organizing efforts. JPI is a nationally recognized organization who does work in Washington, D.C., Maryland, and Virginia.

Kimberly Haven’s journey as an advocate began when she sought to regain her own voting rights after release from a Maryland prison in 2001. As a result of Kimberly’s hard work and the support and guidance of organizations and affected individuals, the Maryland House and Senate in March 2007 approved the Voting Rights Protection Act, which re- enfranchised 50,000 residents who had completed their sentences. Since that time, Kimberly Haven has served as the executive director of Justice Maryland, the Maryland Justice Project, and project director for the Maryland Public Defender's Pre-Trial and Bail Reform Campaign.  Currently, Kimberly is serving as IAHR’s Legislative Liaison to end the abuse of long-term isolation in Maryland state prisons

Munib Lohrasbi first developed a passion helping people with disabilities while volunteering with Best Buddies, a nonprofit that works to create opportunities for people with intellectual and developmental disabilities, in high school, Upon graduation from the University of Maryland Law School, he wanted to combine his passion for disability rights advocacy with his criminal justice and legal background. In the OSI-Baltimore Community Fellowship, Lohrasbi works with Disability Rights Maryland (DRM) to improve conditions for people with disabilities in prison around the state.

Charles M. Feinberg was a congregational rabbi for 42 years. He served and led congregations in Wisconsin, New York, British Columbia, and Washington, DC. He served as a rabbi at Adas Israel Congregation in Washington, DC from 2006 to 2015. During his career, Rabbi Feinberg has been an advocate for Central American Refugees, the poor and the homeless, for interfaith dialogue and cooperation, and for respecting the human rights of both Palestinians and Israelis. Rabbi Feinberg received his rabbinical ordination from the Jewish Theological Seminary of America. Rabbi Feinberg is beginning his fourth year as Executive Director of IAHR.


Sign Up for Advocacy Day in Annapolis, MD on February 19

Join us for the Fourth Annual IAHR Advocacy Day in Annapolis 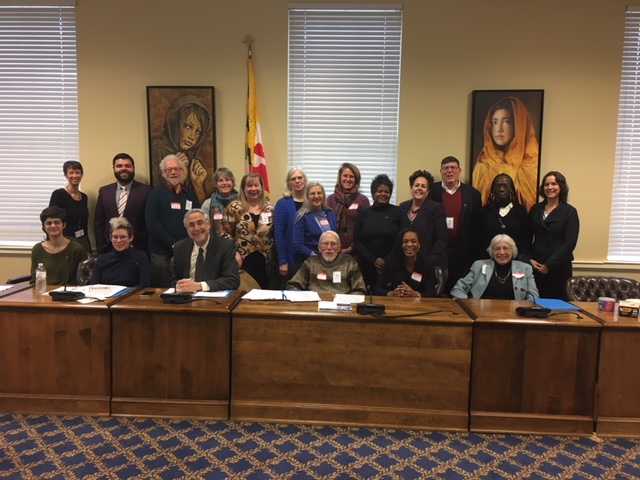 Photo from a previous Advocacy Day

Legislation: Two bills (but no official numbers yet):

Bill #1: to ban direct release from solitary to the public (with some exceptions, especially for the health of the inmate), sponsored by Senator Will Smith and Delegate Jazz Lewis.

Bill #2: to limit the number of consecutive days in a given year that an inmate may be held (15 days is the recommendation from research and Corrections guidelines), sponsored by Senator Susan Lee and Delegate Jazz Lewis.

Parking: Gotts Court Garage (best entrance is 25 Calvert Street, next door to a cash only garage) is the closest. There are also other options that we will send closer to the date.

3 pm: Conclusion of the day (with many thanks!)

In the "Comments" box, please indicate your district's senator and delegate. You can find your Delegate or Senator at http://mdelect.net/

Closer to the date we will provide summaries of the IAHR bills and the bills themselves, more parking information and a fact sheet on solitary.

Urge Your Delegate to support HB 1284

On Saturday, January 11, activists, family members and supporters rallied at the Bell Tower in Richmond’s Capitol Square to support recently filed prison reform bills in the General Assembly, including measures such as solitary confinement, parole, record expungement and incentives for good behavior.

More than 50 supporters attended the rally, which allotted speaking time for organization leaders, and family members of those incarcerated, and for letters from inmates to be read. Many held posters outlining prison reform bills currently before the General Assembly or telling the story of an incarcerated loved one.

The rally was led by the Virginia Prison Justice Network, which includes 20 organizations working for reform in the Virginia Department of Corrections. The network was formed by those who are or were incarcerated and prison reform activists with the goal of creating justice and a voice for incarcerated individuals and their families.

The rally was led by the Virginia Prison Justice  Network, which includes 20 organizations working for reform in the Virginia Department of Corrections. The network was formed by those who are or were incarcerated and prison reform activists with the goal of creating justice and a voice for incarcerated individuals and their families.

IAHR was represented by Board Member and solitary survivor David Smith. He called on the crowd to 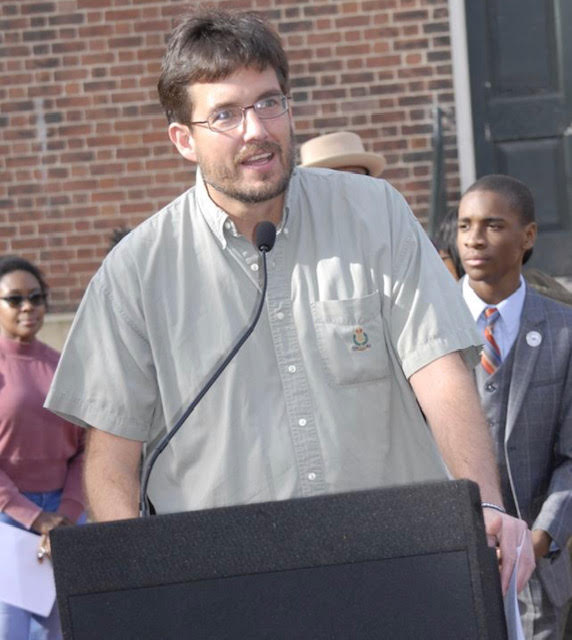 If you weren't able to make it to the rally you can still help this bill pass. Contact your delegate and tell them if Gov. Northam wants justice in Virginia to be "tempered with mercy," as he said in a recent press conference, then we must eliminate the use of solitary confinement in Virginia.

Click here to find your Virginia Delegate or Senator.

“We're not just looking for legislative reform, what we want is a total transformation of the system,” said Margaret Breslau, Virginia Prison Justice Network co-founder. “And in order to do that, prisoners and their family members have to have a seat at the table.”

Letter from Prison
Solitary Confinement as a Barometer for Recidivism
1/10/2020
by MarQui Clardy, Jr

A couple days ago, another inmate in my housing unit got into a heated argument with a correctional officer. The officer threatened to put the inmate in solitary confinement for a couple weeks if he didn't shut up. The inmate, however, responded that he didn't care about going to the hole. "I'll just sleep those weeks off and be right back out here before you know it," he arrogantly retorted. That altercation, which happens several times a day every day in prison, shows not only how easy it is for offenders to get thrown in the hole by power stricken officers, but also the contemptuous apathy with which some offenders regard being punished with "hole time," and it may be a reflection of how they view being incarcerated in general. Just as I can say that the hole is terrible, and, after having experienced it, I never want to go back in there, I can also say that prison is terrible, and that after this experience is over, I will never be incarcerated again. Conversely, if the threat of being put in solitary confinement does NOT deter offenders from bad conduct in prison, maybe the threat of re-incarceration won't deter them from bad conduct when they're back in society.

Most offenders, including me, who have experienced solitary confinement, avoid it like the plague. We are respectful to the staff, follow the institutional rules, and spend our time productively working, taking educational classes, vocational trades, correspondence courses, and rehabilitative programs, reading, watching TV, listening to music, exercising, playing sports, attending religious services, etc. But there are also those offenders who, when given the choice to do right or wrong, are in the habit of choosing what's wrong, even when the consequence of those wrong choices is placement in solitary confinement. These offenders spend their time antagonizing the staff (and other offenders), gambling, stealing, fighting, gangbanging, avoiding school, buying and selling illegal drugs, getting drunk on prison wine, and violating other institutional policies. The threat of being locked in the hole means nothing to them, therefore, it has no bearing on their behavior.

These criminally inclined offenders, whom officers would rather keep locked in solitary confinement so they can't disrupt order and influence negative behavior in general population, are whom consequentialist legislators have in mind when they enact policies that keep offenders in prison longer to incapacitate them from breaking more laws in society. Every day, I see inmates shamelessly indulging in the same destructive behaviors that landed them in prison, as if they have no desire to better themselves. Some are candid about their plans to go right back to a criminal lifestyle upon their release from prison. Being around these individuals, I can't help but understand the rationale behind the aforementioned incapacitated criminal justice policies. It's not fair to the public when these offenders are released from prison only to wreak more havoc and endanger others. The problem is that the effects of such harsh policies extend far beyond those offenders, who represent only a fraction of the prison population, and deleteriously affect the productive offenders who would benefit from early release mechanisms such as parole (which is not available in Virginia) and executive clemency.

How offenders respond to solitary confinement - or the threat of it - may be indicative of their overall view of incarceration. This can be used to assess their individual risk of recidivism. Legislators can't predict which offenders are likely to re-offend and which of us only need one taste of incarceration to be deterred from crime, so, whether out of laziness, efficiency, personal bias, or a lack of understanding of - or a lack of empathy for - those who break the law, they enact "one size fits all" policies as if every offender responds to incarceration the same way. We don't. Just as experiencing solitary confinement once is enough of a "poor behavior" deterrent for some incarcerated individuals (and not others), penal confinement in itself will have differing levels of future crime deterrence on us. Understanding the psychology and behaviors of offenders is the key to a more individualistic criminal justice reform approach. A study on this topic may be a step in that direction.

I really appreciate MarQui’s sending us his thoughts about how he has experienced solitary in a Virginia prison.  I am struck by how solitary is such a futile and pointless response to serious disturbed and destructive behaviors.  I can see how you might want to isolate a person acting out for a brief period of time just as a parent might send a misbehaving child to his or her room. Isolation, however, is not a way to treat serious behavioral problems.  There needs to be a diagnosis and a treatment plan for people acting out in a destructive way.  But our prisons are not set up to treat serious behavioral problems.  We need to end prolonged isolation and instead transfer funds used to isolate people into treating them psychologically, medically, and educationally.