Although we have reached only the midway point in February, much is happening.  This month’s newsletter announces the launch of a new animated video on solitary confinement created especially for IAHR.  In addition, we have articles on Advocacy Day in Annapolis, Action items in Maryland and DC, a report on the reporting bill on solitary confinement (restrictive housing) in the Virginia Legislature and an announcement on an upcoming rally for returning citizens and their families in DC.

IAHR expresses its profound gratitude to Sue Borchardt for producing a fabulous video on solitary confinement.  Sue is a well-recognized and expert film animator.  Sue approached IAHR and asked us to be involved in the production of the film.  The film is 2 minutes long and includes material to counter arguments against reform of prolonged isolation in U.S. prisons.  Please view the film and then send it to your friends and post it on facebook and other social media. 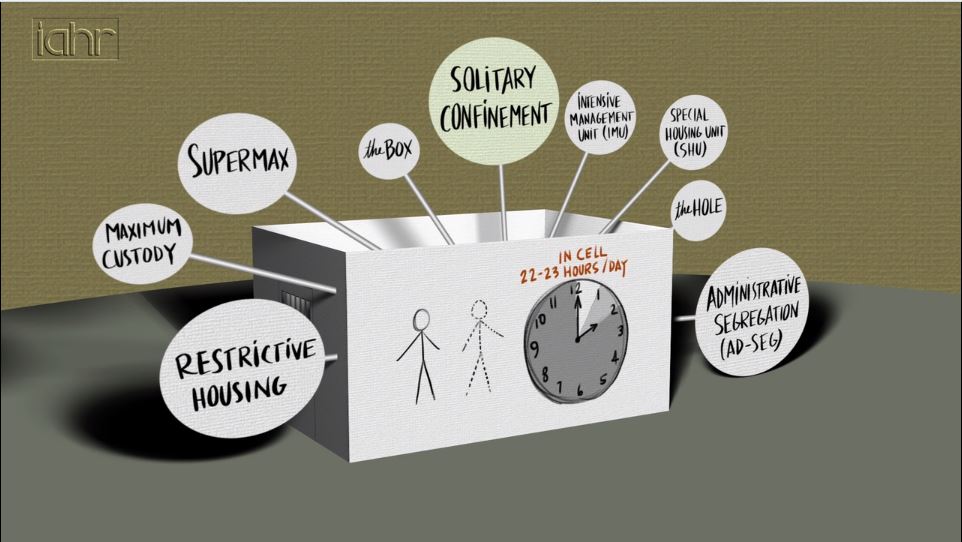 Over 50 people attended Advocacy Day on February 6.  The day included orientation sessions led by Rabbi Feinberg and IAHR’s legislative liaison, Kimberly Haven.  People were sent out in small groups to speak to legislators from the House of Delegates Judiciary Committee and the Senate’s Judicial Proceedings Committee.  Our volunteers were well informed on the bills IAHR is introducing and they were well received.

Here is what you can do:

Read our bills, HB 1002 and HB 1029, and information about solitary on our website.  Click here for that information.

Contact by email or phone legislators on the House of Delegates Judiciary Committee asking them to support HB 1002 and HB 1029.  Below you will find a sample letter to send and a link to the members of the Judiciary Committee with their contact information.

Maryland currently uses segregation/restrictive housing more than the majority of other states. Maryland uses segregation at more than twice the national average. In fact, in 2018 we ranked 7th out of 43 state prison systems and more than 50% of the prison population spent time in segregation.

HB 1002  will address a significant threat to public safety.  Over the past 3 years, Maryland has released 834 inmates back to the community directly from segregation.  They are ill-prepared to return to the community as they have not been afforded any kind of re-socialization, re-entry planning, mental health assessments and transition services.  This process would begin six months prior to an inmate’s release.

HB 1029 would limit the number of days inmates can be held in segregation. This bill represents a more humane approach and would improve the conditions of confinement. One of the goals of this legislation is to make sure that inmates have mental health evaluations, opportunities for de-escalation and a plan that provides step-down opportunities to return to general population.

Inmates who pose a safety risk can be separated from the general population and segregation should be the sanction of last resort – not the default sanction as it is currently used. Moreover, it is 3 times more expensive to hold an inmate in segregation than general population.  The cost savings could be used for staffing and programming.

It is time that Maryland reevaluate this issue and follow the lead of states such as Colorado, Illinois, Maine, Mississippi, and North Dakota. We can transform our prisons and in doing so, make our communities safer.

Your Name and Address

Concern About Conditions at CTF of the DC Jail

This week IAHR received multiple letters of concern about conditions at CTF (Correctional Treatment Center) at the DC Jail.  The DC Jail is a correctional facility that houses pre-trial offenders, sentenced misdemeanants and convicted felons awaiting transfer to the Federal Bureau of Prisons. Only male offenders are housed at the DC Jail. Female offenders, males and juveniles being adjudicated as adults are housed at the CTF.

People are concerned that most residents at CTF have had little if no opportunity to get fresh air (no outside recreation) for the past eight months. They have been denied any access to outdoor recreation, despite repeated requests, and given no reason for the denial. Some have reported that this has been going since January 2018. Individuals are being forced to breathe in moldy air 24/7.

These concerns have been shared with the DOC Director, Deputy Director, Warden, and Deputy Warden by individuals and some family members, but there has been no response to address it. We need to raise awareness and ask the Department of Corrections to respond to these concerns as soon as possible.  IAHR expects the Department of Corrections to give these men and women at least several hours of fresh air time each week.

We understand that the men and women are suffering and this has been raising tensions within CTF.  If you know anyone who has heard about this situation from those on the inside, please urge them to contact the following individuals listed below.  We urge everyone to contact Director Booth and Council Member Charles Allen to express your concern about this situation.

Quincy Booth, Director of the Department of Corrections
to Email: [email protected]

IAHR has been working for enactment of a bill in the Virginia General Assembly that would require the Virginia Department of Corrections (VDOC) to publish certain data concerning its use of "restrictive housing," the VDOC's preferred label for solitary confinement.  Working with IAHR and our coalition partners, Delegate Patrick Hope introduced HB 1642.  It included certain provisions to which the VDOC objected on the basis of cost, claiming that the information currently exists only in paper records. With this in mind, advocates offered to remove several requirements from the bill to minimize its cost.

We later learned that Senator Dick Saslaw, whom we had asked to introduce an identical bill in the Senate, was simultaneously planning to introduce a much weaker bill instead.  His bill, SB 1777, passed the Senate, while HB 1642 was watered down as it moved through the House to more closely resemble SB 1777.

Changes that have been made in HB 1642 since it was first introduced include:

The General Assembly is scheduled to remain in session only through February 23.

#Cut50 is a non-profit whose mission is to cut the number of incarcerated people in the United States by 50%.  They will be sponsoring a rally on Tuesday, March 5 at 4 p.m. at the D.C. Department of Employment Services to raise awareness for the training/employment needs of the formerly incarcerated. At 4pm a moment of silence will be held as the group stands in solidarity with those currently incarcerated across the country undergoing the "4 o'clock count". Also, a social media campaign called #standandbecounted will encourage people to stand and be counted at 4pm wherever they are and share on IG, Twitter, and Facebook.

Click here to register for the event. IAHR is a co-sponsor. 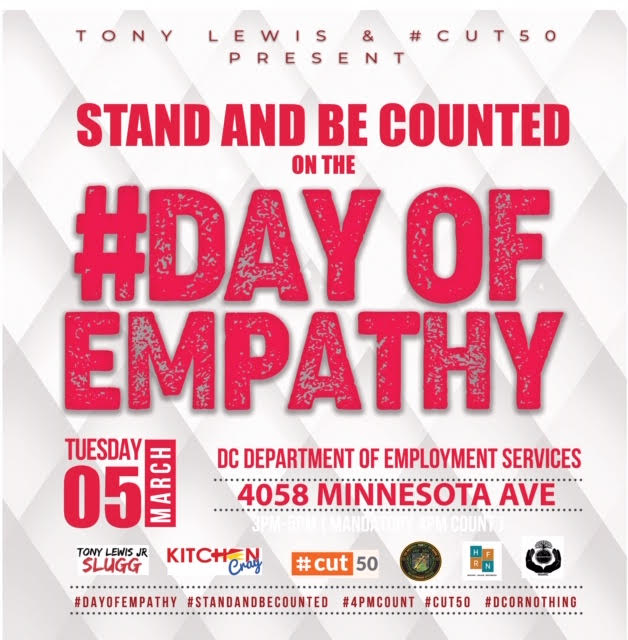