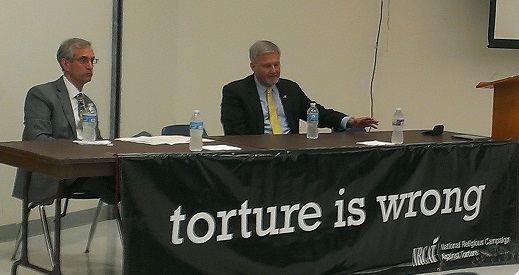 Dr. Stephen Colecchi (left) with the U.S. Catholic Conference of Bishops and Colonel Morris Davis (right) share their moral and ethical concerns with the U.S. use of torture on detainees at Guantanamo and abroad.

IAHR is committed to campaigns that (1) support measures to ensure that U.S. never tortures again and (2) to end indefinite detention without charges or trial.  While most of our campaigns revolve around the Guantanamo Detention Center, we recognize that there are other aspects of American policy that also raise concerns about these issues by both the American administration and nations that receive support from the U.S. government.

Our Adopt a Detainee Program

Along with our partners, IAHR participates with the following campaigns: