IAHR’s September 2019 Newsletter highlights our special September 4 Event at Adas Israel Congregation, a significant court decision in Virginia, an upcoming program on Solitary in Maryland that will take place in Howard County, a report on IAHR’s Pen Pal Project, and IAHR’s monthly letter from prison by MarQui Clardy.  You will also find links to two essays on different aspects of criminal justice. 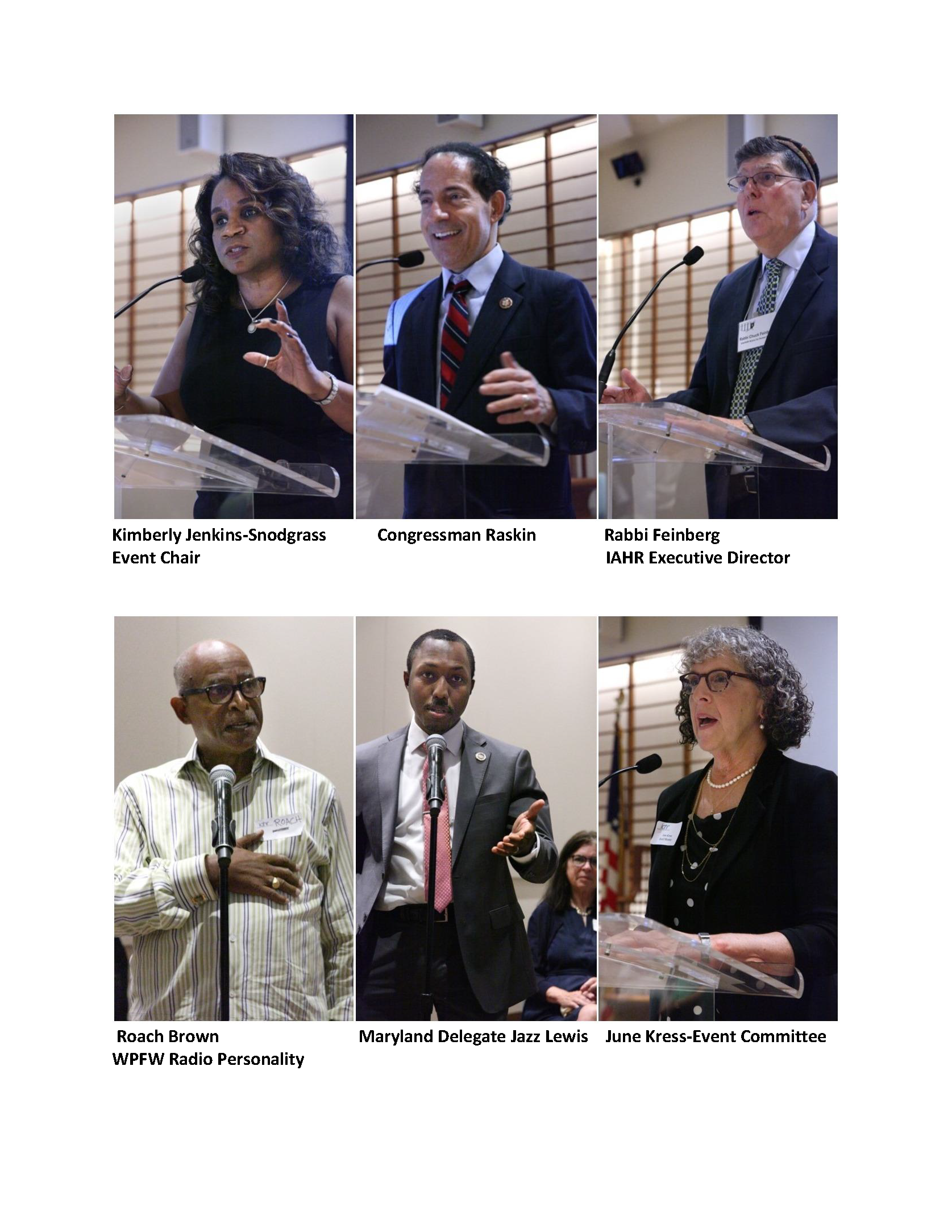 Over 100 people attended the September 4 program at Adas Israel featuring Congressman Jamie Raskin (MD-8th District).  Congressman Raskin’s talk was preceded by interviews of different attendees that were videoed on a “red carpet.”   More in depth interviews were conducted by radio and TV personality Madelyne Woods in front of a video camera.  Ms. Woods leads a radio program on WMMJ (102.3 and 92.7) on Sunday mornings from 6 to 10 a.m.  Woods is a veteran television and radio personality whose broadcast career spans over two decades. She’s a regular contributor to the Tom Joyner Morning Show, a former BET host and has had interviews featured on several major TV networks.

The interviews will be edited and turned into a film about advocacy on solitary confinement.

The Congressman then said the lesson of that effort is that the “improbable can become the inevitable.”  He applied that lesson to ending the abuse of solitary confinement.  What may seem difficult to pass now can quickly become widely accepted.

Following Congressman’s talk, he fielded questions from the audience.  One of the questions was from Delegate Jazz Lewis (MD-24th District).  Delegate Lewis asked for Congressman’s support for legislation ending the abuse of solitary confinement in the upcoming session of the Maryland Legislature.  He asked the Congressman to testify at a hearing in Annapolis next winter.   The Congressman said he would come depending on his congressional schedule.

Another highlight were the remarks of WPFW radio personality, Roach Brown.  Mr. Brown spoke how he served time as a young man and was in solitary eight different times.  When he was released, he went to St Elizabeth’s Hospital to recover.  He was at St Elizabeth’s for three years.  Mr. Brown gave eloquent testimony to terrible effects of prolonged isolation.

The program concluded with an ask for donations to support IAHR’s work. 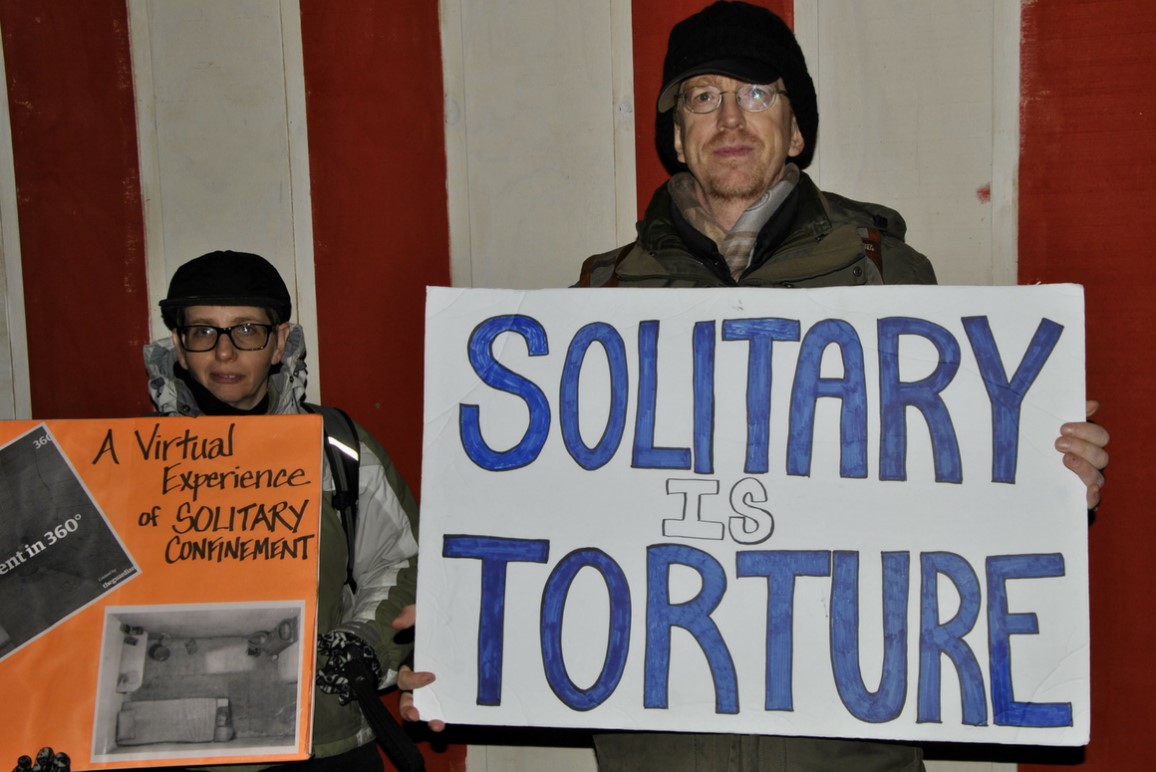 Federal District Court Judge Robert E. Payne today issued a sweeping 67-page opinion rejecting in its entirety an attempt by Virginia Department of Corrections (VDOC) officials and employees to block judicial review of their use of solitary confinement in state prisons.

The ACLU of Virginia, together with the Roderick and Solange MacArthur Justice Center and pro bono attorneys from Washington, D.C., brought the case on behalf of Nicolas Reyes, a monolingual Spanish speaker who was held in solitary confinement for more than 12 years at Red Onion State Prison. Mr. Reyes’ inability to communicate in English meant that he had no meaningful access to VDOC’s Step-Down Program that VDOC claims gives people a pathway out of solitary confinement. The complaint alleges Mr. Reyes decompensated mentally and physically as a result of his forced isolated confinement.

“It is our hope that the judge’s complete rejection of the arguments made by the Office of the Attorney General in defending VDOC’s continued use of solitary confinement will result in VDOC, the attorney general and the Governor’s Office taking a hard look at their continued defense of this inhumane practice, and result in a decision to discontinue its use except in the most extreme circumstances and for very limited periods of time,” said ACLU-VA Executive Director, Claire Guthrie Gastañaga.

The lawsuit claims that VDOC’s treatment of Mr. Reyes subjected him to unconstitutional cruel and unusual punishment, deprived him of his constitutional rights to due process and equal protection, and violated his statutory rights to be free from discrimination based on his national origin and disability.

“Experts and human rights advocates have long recognized that solitary confinement is inimical to human dignity and counterproductive to the stated goal of running safe prisons,” said Maggie Filler, attorney with the MacArthur Justice Center. “In opinion after opinion, courts around the country are showing that they, too, take seriously the enormous threat that solitary confinement poses for prisoners. It is time to put a stop to this barbaric practice.”

The decision on behalf of Mr. Reyes comes in the wake of a precedent-setting decision from the Fourth Circuit Court of Appeals, Porter v. Clarke, which held that solitary conditions created an unconstitutional risk that prisoners would suffer severe mental harm. The ACLU-VA filed an amicus in that case in support of Mr. Porter's claims.

“It is well accepted that extended solitary confinement can cause or exacerbate mental illness which is clearly what happened in this case,” said Vishal Agraharkar, senior staff attorney for ACLU-VA. “Mr. Reyes’ complete isolation because of his limited English compounded the harm he faced in a prison that made little to no effort to provide services in his native tongue,” he added. As Judge Payne wrote in his opinion, there is "no doubt that Reyes has alleged serious medical conditions as to which Defendants were fully aware and indifferent.”

The court's refusal to grant the VDOC defendants' motion to dismiss allows this case to move toward to discovery and trial and provides Mr. Reyes the opportunity to prove the truth of his allegations.


IAHR Next Forum On Solitary Confinement in Maryland

Refreshments will be served 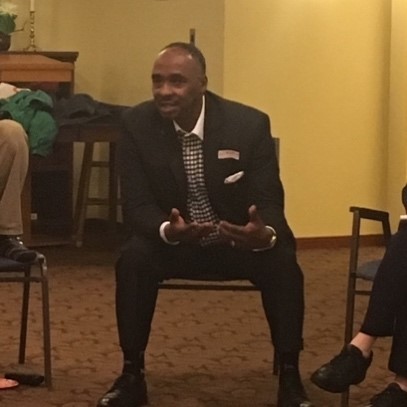 Warren Rymes is a returning citizen whose sentence was commuted by Governor Hogan in August 2018.  Since that time, Warren has become involved in IAHR.  Warren is especially interested in solitary confinement and mental health services in the Maryland prison system.  Warren advises criminal justice students in the Prison and Justice Initiative at Georgetown University.  He also lectures in the Georgetown Law School.  Recently, Warren began consulting with the Mayor’s Office of African American Male Engagement on a project to stop violence in Baltimore.  Warren has also started his own business called 3R which assists returning citizens in their recovery, rehabilitation, and reentry.

Kimberly Haven’s journey as an advocate began when she sought to regain her own voting rights after release from a Maryland prison in 2001. As a result of Kimberly’s hard work and the support and guidance of organizations and affected individuals, the Maryland House and Senate in March 2007 approved the Voting Rights Protection Act, which re- enfranchised 50,000 residents who had completed their sentences. Since that time, Kimberly Haven has served as the executive director of Justice Maryland, the Maryland Justice Project, and project director for the Maryland Public Defender's Pre-Trial and Bail Reform Campaign.  Currently, Kimberly is serving as IAHR’s Legislative Liaison to end the abuse of long term isolation in Maryland state prisons.

Charles M. Feinberg was a congregational rabbi for 42 years. He served and led congregations in Wisconsin, New York, British Columbia, and Washington, DC. He served as a rabbi at Adas Israel Congregation in Washington, DC from 2006 to 2015. During his career, Rabbi Feinberg has been an advocate for Central American Refugees, the poor and the homeless, for interfaith dialogue and cooperation, and for respecting the human rights of both Palestinians and Israelis. Rabbi Feinberg received his rabbinical ordination from the Jewish Theological Seminary of America. Rabbi Feinberg is beginning his fourth year as Executive Director of IAHR.

Munib Lohrasbi first developed a passion helping people with disabilities while volunteering with Best Buddies, a nonprofit that works to create opportunities for people with intellectual and developmental disabilities, in high school. In college, he continued this work by volunteering with Goodwill and advocating for disability rights. Lohrasbi went on to law school at the University of Maryland, where he worked in a criminal law clinic and then a disability law clinic with the National Association of the Deaf. Upon graduation from law school, he wanted to combine his passion for disability rights advocacy with his criminal justice and legal background. In the OSI-Baltimore Community Fellowship, Lohrasbi works with Disability Rights Maryland (DRM) to improve conditions for people with disabilities in prison around the state. As the state’s designated protection and advocacy agency for people with disabilities, DRM has access to every prison in the state to inspect conditions and collect data. However, the agency has lacked capacity to undertake a comprehensive review.

Initiated in November 2017 to bring a sense of connection/community to the approximately 4,600 DC residents who are placed in any one of the 122 Federal Correctional Institutions. Rabbi Feinberg persuaded officials in various Federal prisons to post a notice about the Program so incarcerated persons could request a Pen Pal by writing to IAHR. We continue to receive requests based on these notices or by incarcerated persons sharing the news about the Pen Pal Program.

Pen Pals are required to engage in a training session given either in person (typically at a faith-based community) or via video conference call. The next video conference call is scheduled for Monday, September 23, 2019 at 7:30PM. If you know of persons who might be interested in a training session, please let John List know.  If you would like to attend the orientation via videoconference, please contact John List as well.