This week we highlight an important action item about Jerry Harper who has been sexually assaulted and abused at Wallens Ridge State Prison in Virginia, a promising legal development in Virginia regarding a federal court case, a letter from prison by MarQui Clardy, and an upcoming webinar on May 21, “Solitary in Time of Pandemic: Virginia’s Impact on the Incarcerated.”

Take Action Now on behalf of Jerry Harper
Covid-19 Update: Results of a Federal Case in Virginia
Letter from Prison: Early Release
Solitary in Time of Pandemic: Virginia's Impact on the Incarcerated

Ridge State Prison, based on the fact that he is a Caucasian Muslim and has complained about his treatment.  Some of his allegations have been corroborated by at least one other person with direct knowledge of them.

These are the allegations:

Mr. Harper was in solitary confinement for about 2 ½ months. For more than a month, he was in a cell with a broken toilet that could not be flushed, was full of feces, and was therefore unusable. When he pleaded for it to be fixed, he was told to ask Allah to fix it. He says he was not allowed to shower for 2 months.

Some of his efforts to communicate with his family and with IAHR have been interfered with. Some of his communications with a lawyer, which are supposed to be confidential, have been intercepted by officers, who have quoted them to Mr. Harper while threatening him.

Please contact the officials listed below and express concern about the reports of the harassment, discrimination, and violence against Jerry Harper. Urge them to (1) ensure that an independent, impartial, and thorough investigation is conducted into the events described above as a matter of urgency; (2) provide a report of the investigation to Mr. Harper; (3) take appropriate action, up to and including criminal charges, against any personnel found to be responsible for mistreating Mr. Harper; and (4) ensure that the officers identified by Mr. Harper as being responsible for his mistreatment are barred from any further contact with him.

Thank you for taking action!

Covid-19 Update: Results of a Federal Case in Virginia

By John Sturc, IAHR Board Member

At the request of the ACLU of Virginia, IAHR is a plaintiff in a petition for a writ of mandamus filed in the Supreme Court of Virginia to

compel the state, the Governor and the heads of the Virginia Departments of Public Safety and of Corrections to take steps to prevent the spread of COVID-19 through jails and prisons in the state. The case is called Interfaith Action for Human Rights (and others) v. Commonwealth of Virginia (and others).

While this case was pending, the Governor and other authorities in Virginia agreed to settle a different case in the United States District Court in Alexandria brought by the ACLU of Virginia and other lawyers on behalf of 27 individuals in the prisons.   Here are some of the highlights of the May 12 settlement:

The terms of the settlement will expire by order of the court after the Governor’s state of emergency expires.

The May 12 settlement is very helpful, but more needs to be done.  The counsel for the plaintiffs is required to rely on information provided to them by VDOC and do not have an independent right to inspect the prisons.   Inmates will not be given copies of the settlement.  The release criteria do not extend to all inmates over 60, and inmates who have been convicted of serious felonies and sex crimes are not eligible for release, regardless of age and health.  It also does not extend to county jails or limit the ability of local courts to order pre-trial detention (even for failures to pay fines) or to limit reincarceration for technical violations of parole or probation.

Because the settlement does not provide all the things that IAHR and the ACLU have asked, the lawsuit in the Virginia Supreme Court is continuing.  We understand that the ACLU and other advocates are considering other lawsuits to help prisoners in this pandemic.

Just as analysts predicted early on, COVID-19 has begun spreading throughout jails, prisons, and detention facilities worldwide at a rapid pace. As I noted in last month's newsletter, we offenders have been keeping a keen eye out for any and all news pertaining to rates of

infection and death behind bars. As of this writing, there have been 719 confirmed cases and five deaths spread across seven Virginia prisons. Even for those of us at prisons where there are no cases, the threat of more infections continues to loom over our heads like a dark cloud. A cloud in which we can all hear the ominous rumbling of thunder as we stare up into the sky wondering if and when the coronavirus-laced rain will begin pouring down on us. The feeling of imminence is unmistakable.

Many offenders, however, see a silver lining surrounding this aforementioned dark cloud, which has given them a ray of hope that they haven't felt in years or decades. This silver lining is the early release initiative that Governor Ralph Northam implemented which allows the Virginia Department of Corrections to send some offenders home earlier than their scheduled release dates.

About two weeks ago, our counselors began passing out early release applications for everyone to fill out. The program, which states that the only eligible offenders are those within 12 months of release (as of April 2020), good-time level 1, a low recidivism risk according to DOC's COMPAS assessment, have a viable home plan, have no active detainers, and those who've not been convicted of any class 1 or sexually violent offenses, automatically disqualifies about 93% of us.

The fact, however, that the Governor is open to releasing offenders at all gives even those of us who don't meet all of the criterion hope that there may be relief for us at some point in the near future as well. In fact, the staff who've been passing out the applications explicitly advised us to apply even if we don't meet all the listed criteria. They seem to have some degree of foresight that the 7% of offenders who are automatically eligible for release isn't enough to achieve the Governor's intended goal of containing the spread of COVID-19 in our overcrowded prisons, and that he may eventually need to amend the eligibility requirements so that more offenders may be considered. At least that's what we're hopeful of, and for those of us who were over-sentenced and have been away from our families for many years/decades (with many more years/decades left to serve), this hope means everything. Maybe this program will give us what all our post-conviction relief efforts didn't.

Not all offenders are so optimistic. Many are dismissing the early release program as just another political dog & pony show that's less about actually containing the spread of COVID-19, and more about making Governor Northam "appear" empathetic to the heightened danger we're in. Some never even bothered filling out the application because they felt it would inevitably be denied, and they didn't want to set themselves up for that type of disappointment. Several fellow inmates I've spoken with about the program have expressed views such as, "They'll leave us in here to die before they let us go home;" "Anybody who believes they're gonna release that many inmates early is stupid;" and "If they truly cared, a lot of us wouldn't be in here in the first place." There are even those on the outside who have criticized the program for "giving false hope to inmates." Their stance may not be unfounded, given the fact that of the 30,000 prisoners in Virginia, only 62 have been released through the program to date.

My personal view of the program lies somewhere between the optimism and pessimism. I meet every criteria except being within 12 months of release, but I didn't let that deter me from applying for early release or being cautiously hopeful that my application might get approved, whether sooner or later. But beneath my hope also lies a reasonable amount of doubt. My experience with our harsh criminal justice system has given me every reason to expect the decision makers not to show me any compassion, regardless of the threat this virus poses. For this reason, I haven't told my family anything about this program. I can handle the disappointment if my application gets denied, but I don't want them to be disappointed as well.

Whether it's our trials, sentencings, appeals, or new bill proposals that could give some offenders relief, the mantra everyone behind bars lives by is: "Hope for the best, but prepare for the worst." That's the prevailing mentality in here now with the Governor's early release program. It has the potential to prevent hundreds, if not thousands, of inmates from becoming infected with COVID-19, but no one (not even the 7% of prisoners who meet all the criteria) has full faith that it will be executed as it should be.

Such miracles just don't happen for offenders. So, as the world continues to adjust to the threat of this deadly virus, all we can do is watch to see what adjustments will be made for us and try to remain positive that whatever happens is genuinely in the interest of our safety as well as public safety. One thing that's for certain is that prisoners are dying from this virus. Now is not the time dangle hope in front of our eyes, only to snatch it away when we reach for it.

Solitary in Time of Pandemic: Virginia's Impact on the Incarcerated 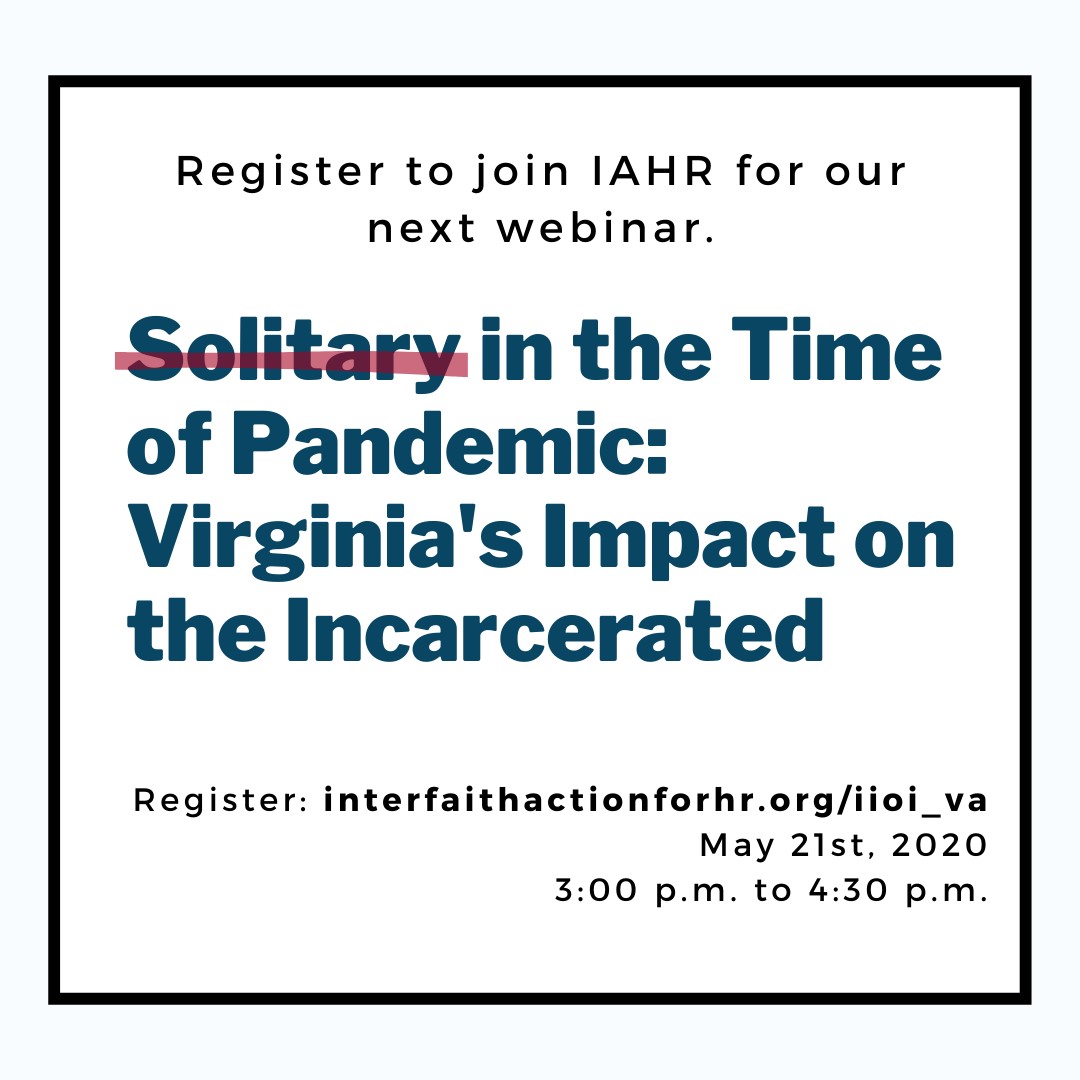 On May 21st, join IAHR for a webinar on COVID-19's impact on Virginia's incarcerated community. Our presenters will touch on subjects regarding the situation in Virginia prisons and after release.

Join us for the second in a three-part series of webinars focusing on how the global pandemic has affected incarcerated people in the DMV.

Cost: This is a free event. If you'd like to support IAHR's advocacy efforts, please consider making a donation to our organization.

David volunteers with formerly incarcerated to equip them to thrive and advocates for change in the Virginia prison and jail system.

Gay was a founding member of the board of directors of Interfaith Action for Human Rights (IAHR) and served on its board until January 2020. As IAHR's Senior Advisor for Virginia, she coordinates the organization's advocacy in Virginia and is in close touch with many people incarcerated in Virginia's state prisons.

Margaret's work centers on human rights advocacy for those in detention in Virginia.

Mateo joined the ACLU of Virginia in July 2017. He supports the work of the Legal and Public Policy departments through analysis, field work, and research.