Yesterday, I participated in a clergy rally for DC Statehood which was also a celebration of Emancipation Day. On April 16, 1862, all the slaves in the District of Columbia were freed.

I stand here to speak on behalf of DC Statehood! Fifteen years ago, I moved to the District of Columbia. I first realized how disenfranchised I was when I saw information online protesting a human rights abuse.  The organization urged me to sign a petition, which I promptly did. Then the petition asked me to identify my Senators and Representative. Wait a Minute—I don’t have any Senators representin 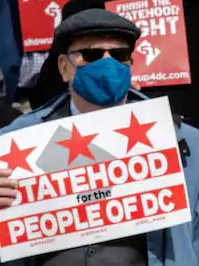 g me in the Senate. I found out I have Representative Norton in the House of Representatives, but she doesn’t have a vote. I realized then that my signature on that petition and my voice did not have the same weight or effect because I am a resident in the District of Columbia

I am the executive director of Interfaith Action for Human Rights. We represent people of faith from the District, Maryland, and Virginia.  One of our goals is to end human rights abuses in correct

Think about it. Suppose you have been released after serving a 15 or 20 year sentence.  You have been incarcerated in a prison in Indiana or in North Carolina or in Arizona. Think how much the District has changed since you were sentenced.  Now you are put on a bus and dropped off in a city you don’t even recognize.  Moreover, very few people even know that you are coming home. You have

not been given any direction or guidance on how to access reentry services. Every day, every month, people are released from the Bureau of Prisons in this way.

When we become a state, we will be able to take full control of our criminal justice system. We will be able to establish a correctional system that will avoid unnecessarily punitive practices such as solitary confinement and that instead will focus on rehabilitation and successful reentry.  We can begin to prepare people to leave prison the very first day they are sentenced instead of on the very last day of their sentence. We will have the responsibility and the ability to fulfill the Scriptural command: Tzedek Tzedek Tirdof---Justice, justice you shall pursue.

We don’t even have to wait for Statehood to take back one element of our complex criminal justice system.  Congress in its last session voted to transfer the parole authority back to the District of Columbia.  We have an opportunity to take full control of parole and turn it from an institution that emphasizes punishment to a program that promotes rehabilitation, justice, and healing.  The Mayor and the DC Council have to act now by putting funding in the 2022 budget for a new parole authority.  If we don’t act, Congress could vote to take back parole authority.  I urge all of my colleagues and all viewing this rally to urge our elected leaders to fund a DC parole authority.

The Hebrew Bible begins by teaching us that every human being is created in God’s image. Being in God’s image means that everyone no matter what he or she may have done must be treated with respect. Every one of us possesses an irreducible holy core.

We must treat people with respect in our criminal justice system. We—the citizens of the District of Columbia—must be treated with respect by giving us full representation in the Congress of the United States.

As people of faith, we stand together to share our support for Washington D.C. to become the 51st state of the United States of America, so that DC citizens will have what all other Americans have, the inalienable right to voting representation in Congress.