In September, Speaker of the House of Representatives, Paul Ryan, is planning to bring a number of criminal justice reform bills to the floor of the House for a vote.  We urge you to write to your Representative to vote for four of these bills.  Here is a description of the bills followed by a links to a list of Maryland and Virginia Representatives and their e-mail addresses.  Please send them a short message asking to vote for these four bills.  In addition, here is a link to an important article on the need to reform mandatory sentencing by Eric Holder: We Can Have Shorter Sentences and Less Crime

The Sentencing Reform Act reduces certain mandatory minimums for drug offenses, reduces the three-strike mandatory life sentence to 25 years, broadens the existing safety valve for low-level drug offenders, and provides judges with greater discretion in determining appropriate sentences while ensuring that serious violent felons do not get out early. The bill also contains sentencing enhancements for Fentanyl trafficking, a highly addictive and deadly drug that is becoming a growing epidemic in the United States.

The Second Chance Reauthorization Act helps prisoners who have completed their sentences successfully return to society.  This legislation, authored by Jim Sensenbrenner (R-WI) and Danny Davis (D-IL), builds on the original Second Chance Act of 2008 and continues to authorize funding for both public and private entities to evaluate and improve reentry programming, including academic and vocational education for offenders in prison, jails, and juvenile facilities.  This legislation includes accountability measures and eliminates programs that have not been used.

Deterring Undue Enforcement by Protecting Rights of Citizens from Excessive Searches and Seizures Act of 2016 (H.R. 5283)

H.R. 5283 strengthens protections for Americans’ property through civil asset forfeiture reform.  The bill raises the standard of proof law enforcement officials must show before depriving an individual of his or her property, increases accountability and oversight of seizures and forfeitures, and strengthens protections for Americans whose property has been seized by law enforcement agencies.  This bill was introduced by Jim Sensenbrenner (R-WI), John Conyers (D-MI), Sheila Jackson Lee (D-TX), Tim Walberg (R-MI), and Peter Roskam (R-IL). 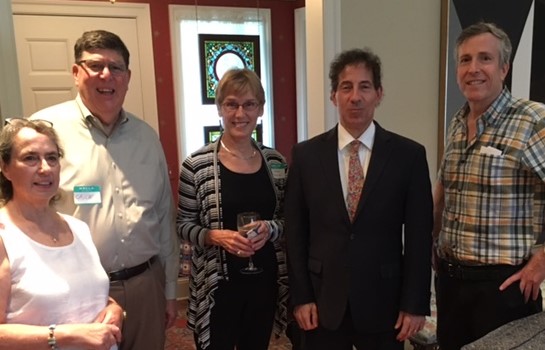 On Thursday, July 21, 40 people gathered at the home of Board member Perry Apelbaum.  Board President and IAHR Founder, Suzanne O’Hatnick spoke about the history of IAHR and its mission.  Rabbi Charles Feinberg, IAHR Executive Director, spoke about some of the important achievements of IAHR over the last year.  Senator Jamie Raskin (D-20th District) gave an interesting and passionate talk about criminal justice reform and first amendment issues.  Specifically, Senator Raskin spoke about his leadership of legislation that banned capital punishment in Maryland and the importance of criminal justice reform.  IAHR is very appreciative of the gracious hospitality of Perry and Laura Apelbaum. Left to right in the photo: Krayna and Charles Feinberg, Suzanne O'Hatnick, Senator Raskin, and Perry Apelbaum.

SAVE THE DATE!  “Solitary” to be Shown at Capitol Visitor Center on September 12

Award winning documentary film maker, Kristi Jacobson, will be showing her HBO film “Solitary” at the Capitol Visitor’s Center on Monday evening, September 12 at 7 pm (doors open at 6:30 pm). The film has been shown at the Washington Documentary Film Festival and the Tribeca Film Festival in New York City. Virginia Prison authorities allowed Ms. Jacobson into Red Onion Supermax Prison in Pound, VA over the course of a year. During that time, she filmed both inmates and prison guards and officials on camera. This film gives a rare look into the conditions of solitary confinement in a supermax prison.

IAHR has been very involved protesting the conditions for a number of prisoners. IAHR, Board Member, Gay Gardner, has been corresponding to thirty different prisoners over the last eighteen months. This correspondence has revealed significant human rights abuses.  A number of men have been in solitary confinement for years, often for trivial offenses such as speaking back to a corrections officer or for not getting a haircut.

This event provides you with a rare opportunity to visit both prisoners and correctional officers who live or work in a maximum security prison.

Here are links to two reviews of the film: Variety and The Innocence Project.

To view a clip of the film, click here.