The intent for fasting this week with Witness Against Torture (WAT) is both to develop a penitent heart for the crimes that we have committed against the detainees in Guantanamo but also as a form of solidarity with detainees on their sustained hunger strikes. But I realize that this fasting is for my benefit.  As the wife of a torture survivor, I have always been moved with compassion for the detainees and the abuses that they have received by my government. But by carrying just a small sliver of their cross, I have increased my awareness, albeit still in a very limited sense, of their suffering.

Friends have offered to "pray for me." I wonder how often prayers are made for the detainees.  When I get a hunger pang, I wish it will go away but then think of them. How my inconvenience is so minimal compared to their sustained suffering. How humbling that is. Humbling also is knowing that these Muslim brethren have adopted an extreme version of nonviolence in response to my predominantly Christian nation's acts of violence against them.

When I don't have a hunger pang (which has happened more frequently now that the initial first 48 hours have passed), I wish for that feeling back. I want to feel closer to them. Continue carrying that sliver of a cross.  Having those pangs raises my level of consciousness to think of them.

Yesterday, I, coincidentally, had an appointment with my doctor. She told me that a one-week long juice fast was not dangerous and was quite gentle towards me in sharing any precautionary advice.  In contrast, I reflect how medical staff at Guantanamo are engaged in the forced feeding of detainees, causing both pain and a loss of dignity.

During Ramadan, Muslims fast for a lunar month to prepare them for Eid.  It is an intimate teaching about the feelings of the poor with the hopes that during the Eid, Muslims will demonstrate greater genorostiy in their almsgiving. In like fashion, I hope that this short week of fasting will make me more generous of heart and most of all more committed in my efforts (with so many others) to persevere until Guantanamo is closed. This fasting is clearly for my benefit. 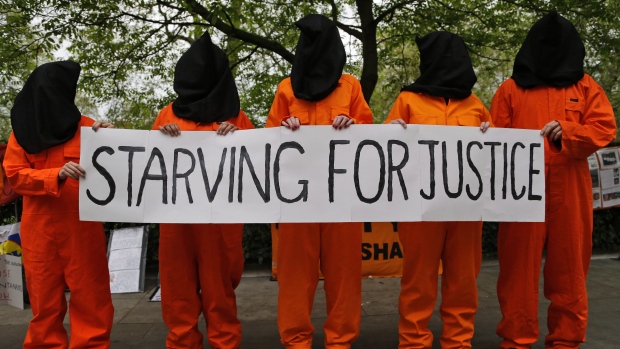