While there has been promising activities in recent days related to the release of detainees from Guantanamo Bay Detention Center, most notably the release of more than 10 detainees, there are still 127 detainees remaining on the base, half of whom have been cleared for release. Simply put, there is still a lot more work to be done.

In this coming week, there will be a series of activist efforts sponsored by our partners and friends at Witness Against Torture (WAT).  Two IAHR members will join the WAT community participating in a week long fast and risked arrest /direct action. The two members have two very diverse backgrounds which indicate that this is an issue that many Americans are moved by and concerned about.

Malachy Kilbride has been an activist since high school opposing the nuclear arms race and the US-Central American conflict in El Salvador and Nicaragua. His activism and organizing deepened in the lead up to the invasions of Afghanistan and Iraq. This is neither the first time he has fasted for social justice nor been arrested. In fact, some would say Malachy has a "recidivism" issue. Like the Good Samaritan story in the Christian bible, Malachy is someone who seeing the injured man on the side of the road, feels compelled to stop and provide assistance.

For Susan Kerin, this will be her first long fast and potential arrest. Susan is married to a torture survivor.  As such, she does not qualify as a "Samaritan" who in the parable was a stranger and even adversary of the injured man. She is the Levite, a member of the community. But unlike the Levite in the Good Samaritan parable, Susan too wants to provide solidarity and assistance and chooses not to ignore the injured man on the side of the road.   She finds the witness of friends like Malachy who have "no skin in the game" inspirational.

We invite you to follow their blog this coming week where they will share their experiences and reflections as part of the larger national effort of the "Witnesses Against Torture."  To learn more about WAT, go to www.witnesstorture.org 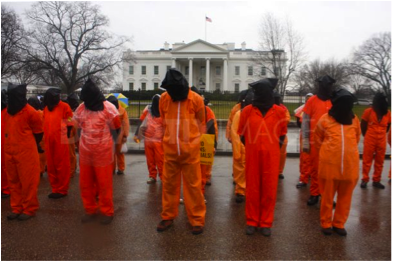